After arguably the toughest year in recent memory, Bayside Church in Granite Bay, California, one of the largest churches in the Sacramento area, wanted to do something special for its congregation this holiday season. As a special holiday gift to the community, Bayside built a Christmas village complete with ice-skating rink, towering Christmas tree and special Christmas light show, a festive holiday experience enhanced using dynamic IP-rated luminaires from Elation Professional.

Alec Takahashi, a former lighting designer and lighting director at the church, was called on to light the project and worked on creative production with the church's creative team, including Bayside creative director Corbin Phillips. Felix Lighting of Southern California supplied all of the lighting gear for the project.

The Christmas experience, which included a 10-minute light show, opened on November 25th and ran through January 3rd. Takahashi says one of the main challenges of the project was getting the vision the church had for the project to fit within a tight budget. "Their ambition for the show visually was massive so trying to match that with a limited amount of fixtures and still have that wow factor was quite a challenge," he says. "When initially thinking about what fixtures I wanted to use, the Proteus line was the first that came to mind. Although I had not personally used the line yet, I knew its reputation as high-quality IP-rated fixtures was phenomenal."

The designer says he sought lighting that was "robust" and could hold up under winter weather conditions. He had recently demoed Elation's new Proteus Lucius™ and although "really impressed" he says he required something a little brighter and moved toward the 50,000-lumen Proteus Maximus™. "We ended up using 48 of them on the project," he says. "They are the workhorses of the light show and really the starring element."

The LED-based Maximus fixtures served a variety of purposes from textures onto the church building, to generic washes for the Christmas village, to punchy beams into the night sky. Positioned on rooftops and other structures, some from behind the village to give the look depth, others worked from lighting towers 150 ft away. Takahashi comments: "For the main look of the show, we had building rooftop fixtures zoomed at their tightest and shooting beams into the sky. There was often some low fog or the surrounding houses were burning fires so it added a texture of smoke to the air, which was a great look." He says that people were attracted by the Maximus beams for miles around. "They drove to the church wondering what was going on and then stayed for the festivities."

Some of the Maximus fixtures were located on lighting towers to throw color or gobo texture across the church building itself with others used for texture onto the trees or to add more color. "The gobo selection is gorgeous for some of the looks we were able to incorporate into the show," Takahashi remarks. Maximus fixtures positioned in the show viewing area supplied a general wash of color or were zoomed out for punchy looks in white such as a big moment at the end of the tree lighting, a look Takahashi calls one of his favorites. "At the final tree lighting we were able to get a really nice punch at the final hit of the musical note of the song. As the tree hits its final white light moment the 30 rooftop Maximus fixtures slow fade into a fan look over the tree. It was a favorite with the crowd and a nice picture moment."

Also used to create atmosphere by coloring the building, structures and ice rink in holiday colors were 93 Elation Fuze Par Z120 IP™ LED par lights, along with 55 SixBar 1000 IP™ LED battens. "We didn't want to use their existing parking lot lighting or building lighting but wanted the atmosphere to be something different so we lit the whole area including the walking and general use areas in colorful, warm lighting. It made for a great feel. The end result was very pleasing to the church and all the feedback that came from the community was also very positive."

The Christmas light show was time-coded to music and also featured figure skaters, lasers and a pixel-mapped Christmas tree of 3000 RGB pixels. Two light shows ran nightly with a general village look decorating the area before and after each show. 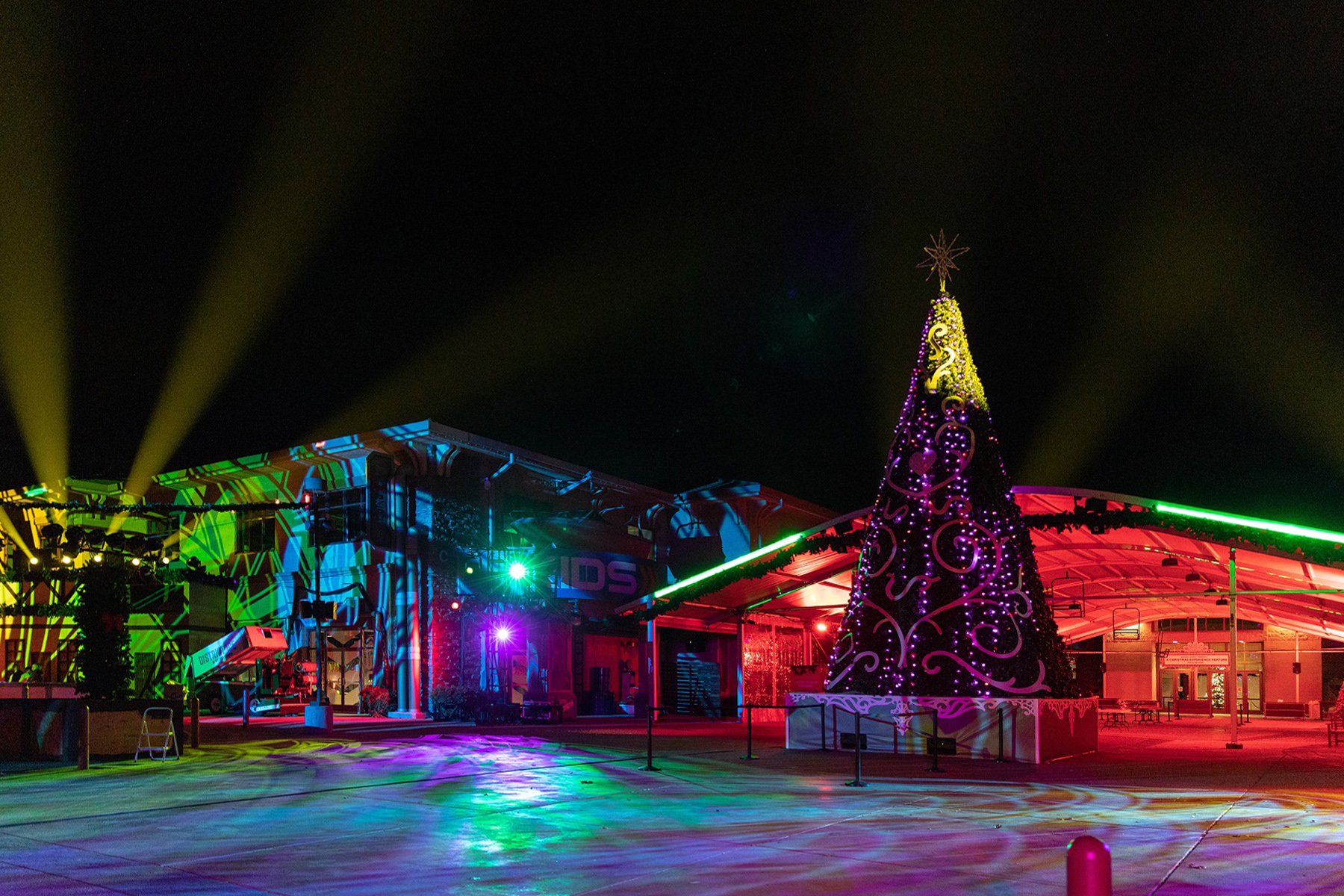 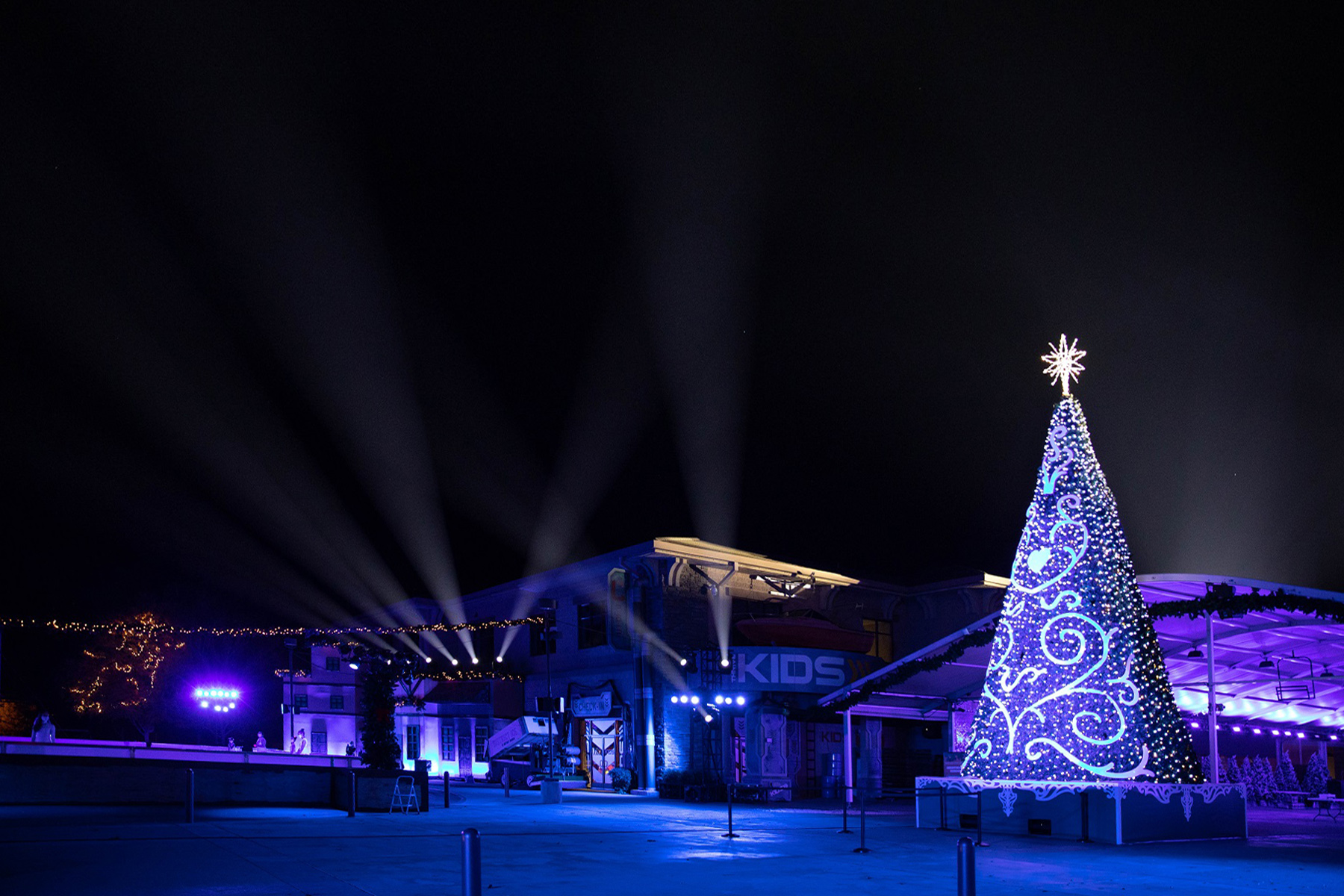