Tom Sutherland was back on the set of Dancing with the Stars recently, lighting his second season of the American reality dance competition for the ABC network. Lead designer at DX7 Design, Sutherland, who used Elation lighting on last season’s show, again turned to Elation fixtures to light the myriad of dances while finding a unique visual solution to fill empty audience space.

“There were some challenges this year as there was no audience, which usually plays a big role in the show. Nobody, especially in television, likes black holes,” said Sutherland, stating, “When you have an expensive set that looks like a million dollars, you don’t want to sacrifice that by a few dodgy shots. With HD cameras and 360-degree looks we have to make sure we have all our bases covered.”

Dead space on the set was something Sutherland was especially wary of when lighting this year’s shows. How could he fill the blank space and still achieve the kind of drama you would have with an audience present? “We did that by adding more lighting and extra video screens,” he said, “and a good chunk of that extra lighting was from Elation.”

A lot in the barrel
Filmed at CBS Television City in Los Angeles, the drama and glitz of Dancing with the Stars has kept fans coming back year after year since its debut in 2005. This year’s Season 29 premiered on September 14th with Elation fixtures again a key component, including DARTZ 360™ LED moving heads, and new to this year’s set, ZCL 360i™ and SixBar 1000™ luminaires. Lighting vendor for Dancing with the Stars is Felix Lighting.

Sutherland says they started this year’s design work by looking to see how many black hole positions there were to fill in the studio and how they could best do that. “That meant we needed to find fixtures that were going to fill those blank spaces while giving me lots of flexibility through an 11-week season. I needed fixtures I could vary up and produce different looks with, fixtures that could be subtle and pretty if we needed them to be, but also give us the drama and tension in the moments where we needed that.” In other words, the designer needed fixtures that have a lot in them. “We did 150 performances on this stage last year and another 150 performances this year so I’m a great fan of having lights that have a lot in the barrel so to speak.”

Runway of lights
Sutherland looked at filling all of the floor seating space with Elation’s tiny ZCL 360i™, a single beam RGBW moving effect with zoom and continuous 360° rotation. He lined three rows of fixtures along the dancefloor, 90 fixtures total, to create a runway of lights left and right of the stage for nice camera looks.

“Joe Holdman, who programs the show, has done some incredible effects with the 360-degree spin,” he explains. “As we go into a tense judging moment, for example, they all tumble and spin while manipulating the zoom; it looks like a massive cascade running up towards the stage and is really beautiful. Because of the zoom, they can just be a subtle twinkle or we can beam them up with a bit more haze if we want to create a bit more drama. We also found that because it’s a black shiny floor they look great just bouncing off and reflecting off that so it looks like we’ve got double the amount of fixtures. They’ve been a fantastic addition to the rig and everyone loves them.”

DARTZ on target
On 2019’s Season 28 of Dancing with the Stars, the LD used Elation’s DARTZ 360™ beam/spot LED moving head as a principal luminaire in an immersive 360-degree lighting environment. This year, he upped their number, using 104 in his design for soft looks that blend with the set before coming to life for dance performances.

“Lots of the camera work on the show is done on a Steadicam and is 360 degrees around the dancers,” Sutherland explains. “Of course we’ve got nothing at one end of the room so we use the DARTZ to just completely fill that space. It’s just a wall of light and the director and producers love it. You can’t even see that the cameras are there. The director’s been opening a lot of the shots in a reverse look, pointing to the back of the room so you see the DARTZ as a backdrop because it’s so stunning.”

Sutherland plays with the DARTZ’s two independent rotating prisms and 14 gobos to create some dazzling effects. “Originally we had 80 fixtures because we thought that the added video screens on the bottom of the set would extend up to the top of the lower balcony but there was a gap there and we decided to fit Dartz fixtures there. I talked to account manager Nicole Barnes at Felix Lighting and she was able to get us another 60. We completely filled out the lower balcony with those and I’m so glad we did because it’s made all the difference. It’s so striking, especially on those Steadicam reverse shots and the 360 shots.” The rig also includes other LED and discharge-based moving heads.

Blend of light and screen
Dancing with the Stars is a shiny, sparkly show with an art deco set and lighting that is essential in complementing the look. Another Elation fixture new to this year’s show is the SixBar 1000™ with 110 of the meter-long six-color LED battens used for expanded color and sparkle. The SixBars fill the void where the audience normally sits, frame the judges’ close up shot, and occupy the gaps between the added LED screens, including on the middle balcony where contestants wait.

“It’s a beautiful blend of light and screens that merges really nicely. The SixBars have been fantastic to add a nice subtle twinkle to the set which we’ve blended in with our main host looks and main dances as well,” Sutherland says, adding that they have been a cost effective solution and are great at filling up space. “We extend the content on the screens into the SixBars and blend everything out into the room nicely so they’ve been fantastic for us. Joe programs lovely effects into them and they really come to life on moments when we need them to.”

Dancing with the Stars has been a mainstay of American reality television for 15 years. With changes implemented last year designed to freshen up the format and a new host in Tyra Banks this year, not to mention a host of stunning lighting designs for each performance, ABC’s staple Monday night show has enjoyed renewed energy with its best ratings in years. 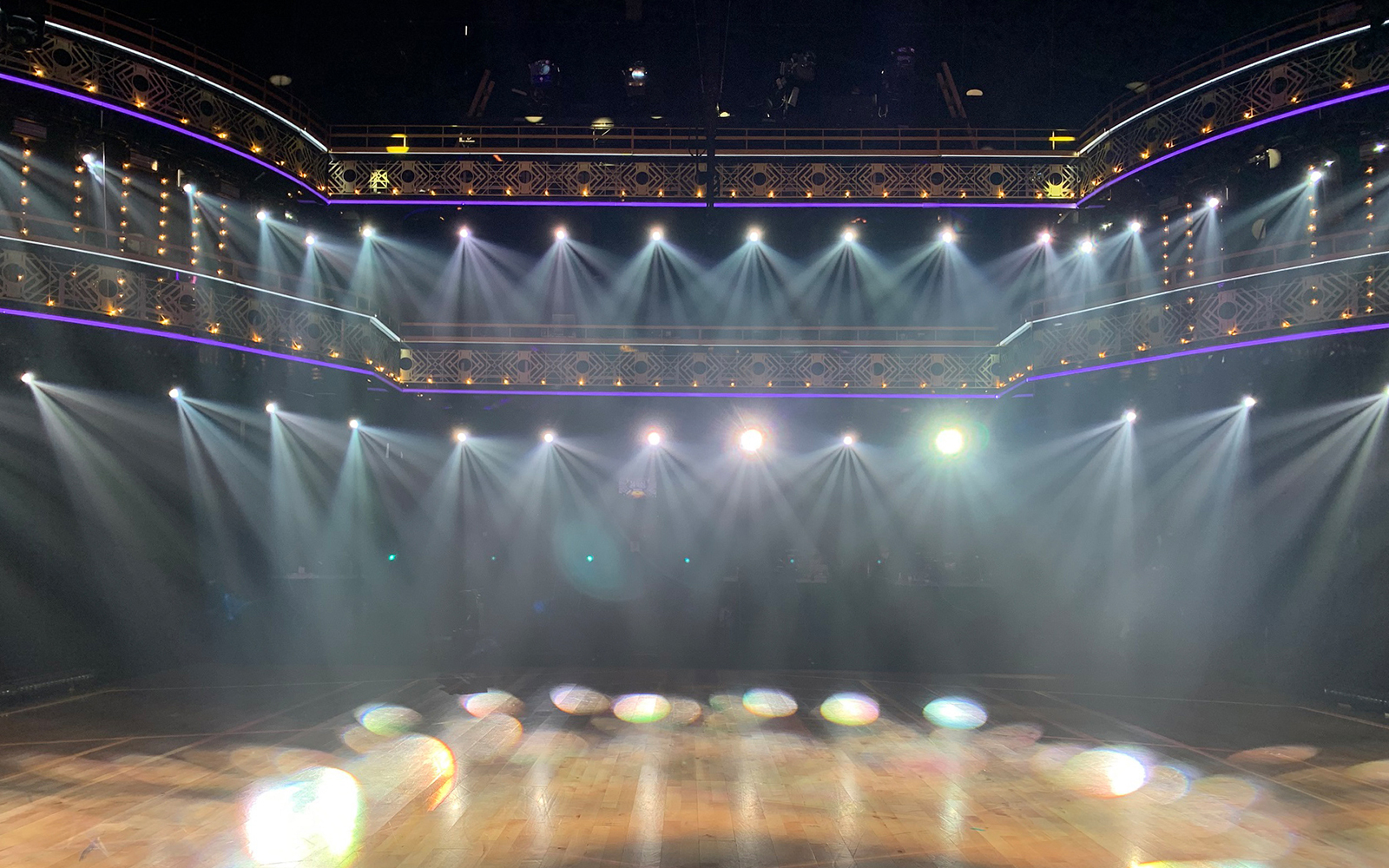 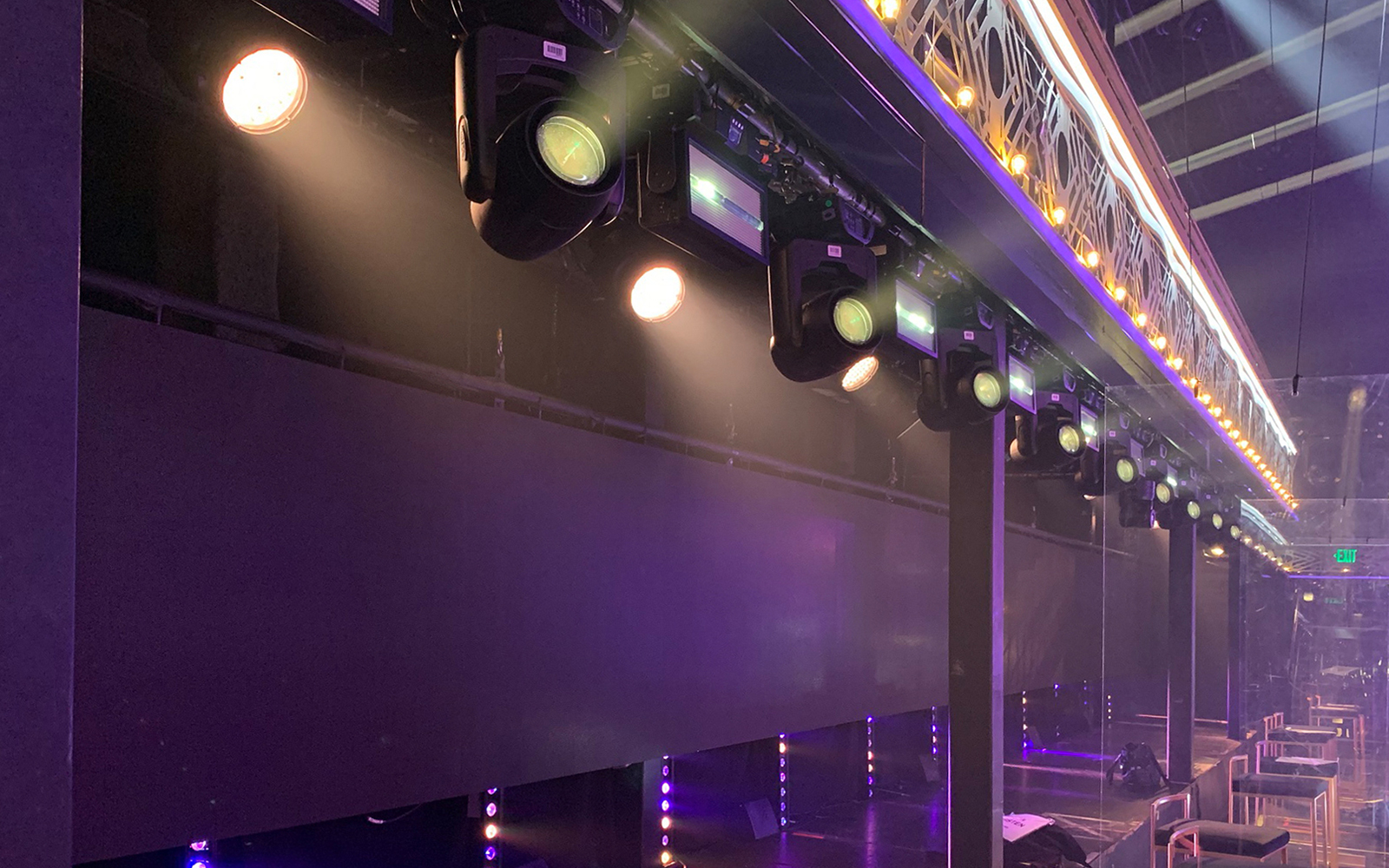 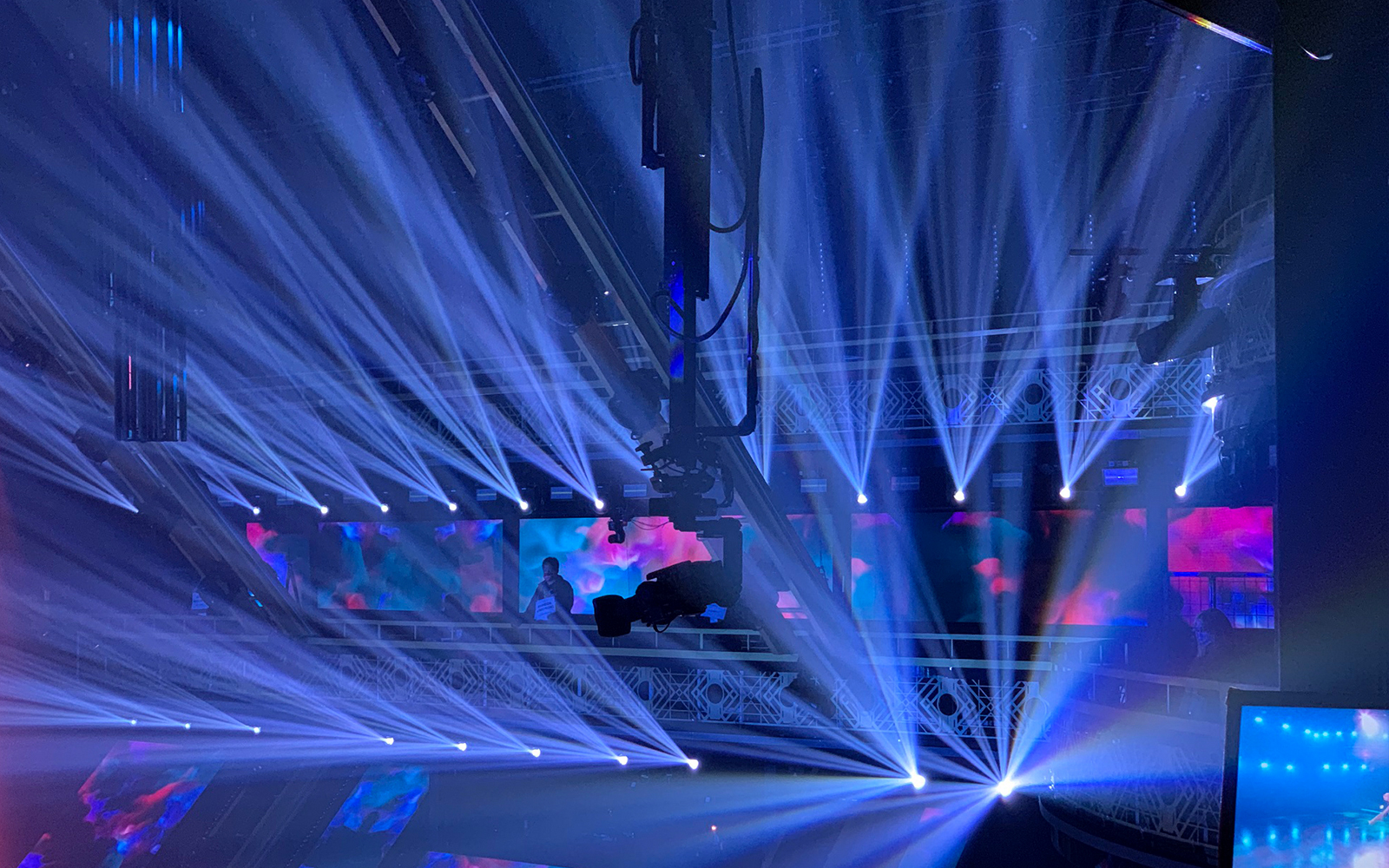 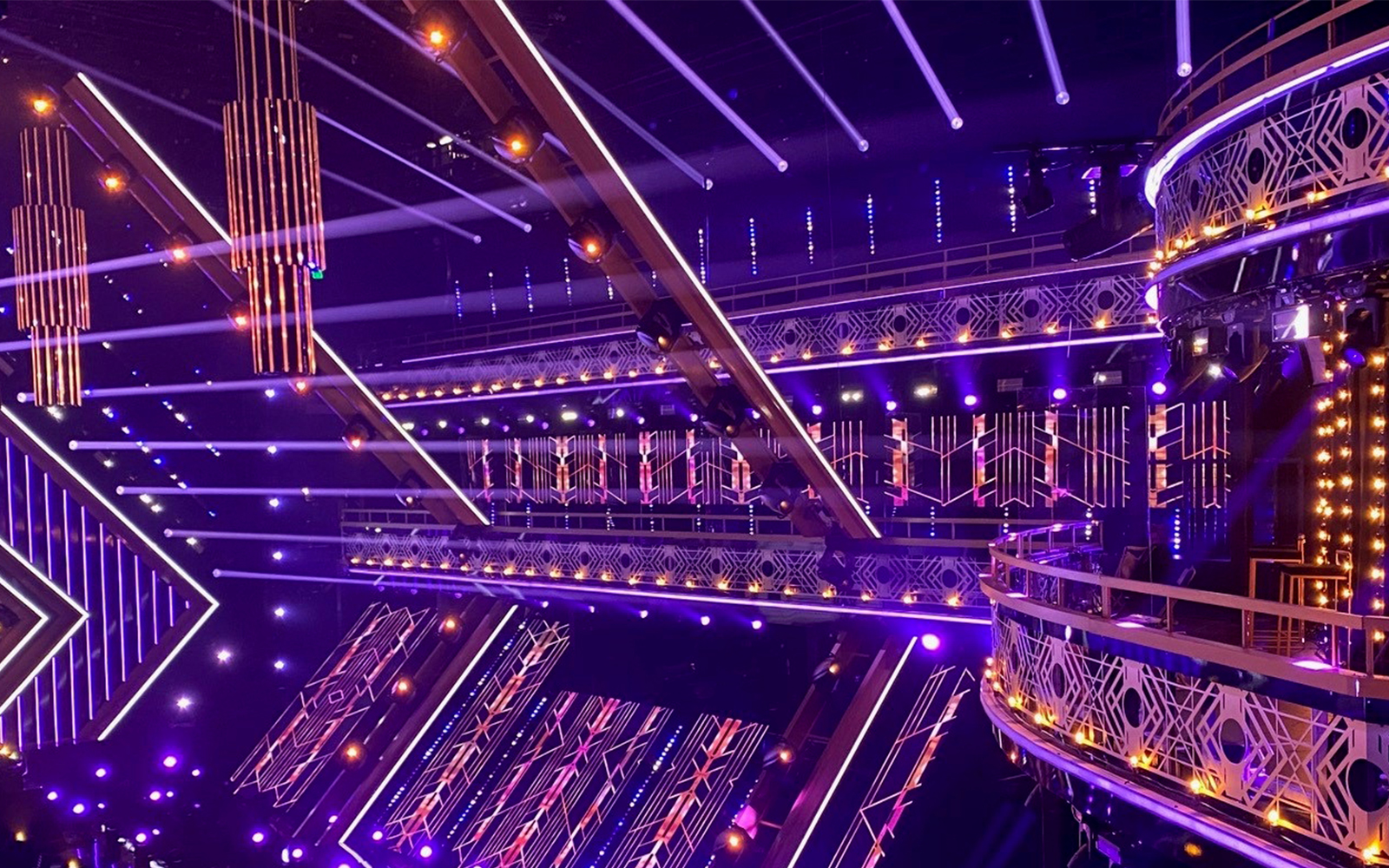