Jerry Appelt turns to power of Excalibur and Maximus on one of his favorite shows of the year.

The annual Summer Night Concert (Das Sommernachtskonzert) by the Vienna Philharmonic at the illustrious Schönbrunn Palace is the second biggest show every year in Austria, only outdone by the world-class orchestra's renowned New Year's Concert. This year, lighting designer and director of photography Jerry Appelt used 280 Elation Proteus series luminaires to light the summer show for 80,000 spectators in the Palace Park plus a worldwide television audience of millions.

Appelt has been part of the event for five years, lighting the entire space for a live audience and camera, which includes the orchestra and stage, the majestic backdrop of Schönbrunn Palace, and the surrounding park. This year, the acclaimed designer had 124 Proteus Maximus, 92 Proteus Excalibur, and 64 Proteus Rayzor 760 at his disposal.

Excalibur - power beam light
Over the years, the event has transitioned to more and more IP65-rated lighting like the Proteus range. Appelt has a long history with the Proteus series, having showcased the Proteus Hybrid on the Burj Khalifa New Year's spectaculars, as well as several other projects over the last four years. He comments, "A lot of our input from our experience with the Proteus on large scale projects like the Burj Khalifa tower in Dubai I can now find in the Proteus Excalibur, which is the reason why I like the fixture very much. They really listened when we gave feedback-big output, the diameter of the lens, better colors, etc.-and we found that is has been fulfilled in the Excalibur."

The enormous output of the Excalibur in combination with a 260-millimeter lens and 0.8° beam competes with xenon searchlights and sky trackers. The beam light generates up to 200,000 lux at 20 meters (7,500 lux at 100 meters) - an incredible light output from a surprisingly compact and correspondingly fast device.

Appelt has used the Proteus Excalibur on other outdoor shows this year, also for TV, and says because of that early assessment and feedback on the Proteus Hybrid, on this Summer Night Concert the Excalibur more or less delivered what he expected. "They replace positions where I have used Proteus before," he says. "I personally like the better colors a lot and the additional intensity brings more punch into the picture. It was a good experience which was no surprise really." The Excaliburs worked in groups of four behind the stage, spread on the roof of the Palace, on PA towers, and atop a hill structure called Gloriette behind the audience.

Maximus - new outdoor key lighting standard
The designer says though what was a surprise for him on the project was the Proteus Maximus, a luminaire he has turned to previously for its weatherproof qualities. "On this location, we used them at much longer distances than we have in the past," he explains. "I was really surprised how much output I could generate out of them in terms of brightness and they also look really good on camera. I was really positive about the result, including the color quality, and I can say it is now one of my new standards in terms of outdoor key lighting." Appelt used the 50,000-lumen LED profile Maximus at key light positions to light the orchestra from the front of house terrace, a throw of approximately 30 meters. They also provided audience key and spec lighting, as well as site lighting on the castle itself.

Additional Elation lighting on the show included the Proteus Rayzor 760, a IP65-rated LED wash luminaire that Appelt used for its weather protection and workhorse wash capability. The compact RGBW lights were used for architectural washes and area lighting, including uplighting facades of the buildings and trees.

LIMA
Responsible for the complete technical lighting solution on the project was LIMA GmbH with lighting gear supplied through Motion in Germany. LIMA handled installation of the lighting for the park, Palace and hill, providing transportation, infrastructure, and crew. It was their third successful year working on the show.

A favorite
Appelt concludes by relating an aspect of the show that makes it unique and one of his favorites to work on. "It is always a fine balance between the needs of the orchestra and their professional musicians, and the needs of the television and live entertainment world. This is something that makes the show very special. The people we work with are always very friendly and open hearted and put a lot of faith in us and my crew and I always look forward to go to Vienna every year for this show. Thank you to event organizer Zigo Mutschlechner and the Vienna Philharmonic, also a special thanks to Thilo Fechtner and Johannes Schneider for the excellent teamwork." 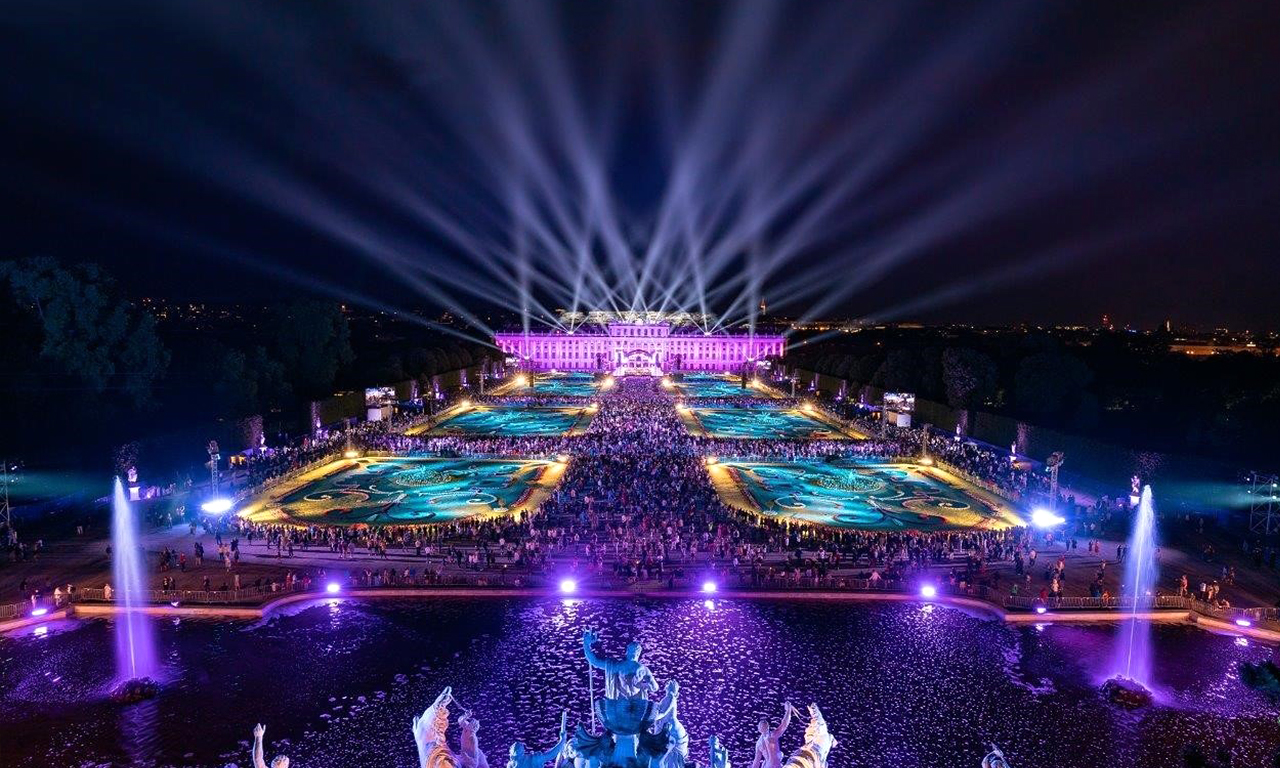