Head of creative and principal designer for Sight Unseen Studios, Kasparovics has been doing shows with Comedy Dynamics since 2012. For the Pat McGann special, he worked with Chicago-based production company JRLX to secure the Elation fixtures and was one of the first to get his hands on the Artiste Van Gogh. “I have known Jason Reberski at JRLX for years; this was a great opportunity to finally work with him on his own turf in Chicago,” Kasparovics said. “Knowing that he was a big supplier of Elation gear, I wanted to try out a couple of the new products so both he and my Elation rep Jean Lariviere were super helpful in getting me the Artiste Van Gogh ahead of their production run.”

From demo to design
Well before the McGann special, Kasparovics had visited the Elation facility in Los Angeles for a demo, where he was introduced to Elation’s newest gear. It was there that he first laid eyes on the Van Gogh. “At that point I didn’t have a show where I could use it yet, but I knew I had to try it out.” he says, “I put it in the back of my mind and thought that it would be a useful fixture for a lot of my corporate and broadcast lighting projects. It was a promising candidate for a key light with a great CRI, option for Fresnel or PC lensing, and full shutter control.”

The designer says he has often used 1000-watt HID source wash lights in the past, fixtures with a lower CRI and only top and bottom shutters. Moreover, they weren’t LED. “When I knew the Pat McGann special was coming I contacted Jason and asked if I could get the Van Goghs,” Kasparovics states. “I knew the fixture was just hitting the market but he was able to get eight for me which I was really thankful for.”

Fixed instead of followspot
Kasparovics explains that he has been aiming to get away from the traditional practice of using followspots as key lighting on stand-up comedy specials, a method that goes way back to the early days of stand up. “It’s a good traditional look for live shows but TV is much less forgiving, and you need a precision that takes extra time we often do not have,” he says. “Frequently we shoot in venues that do not have ideal spot positions, stage depth, or other physical constraints that make it difficult to implement a followspot correctly. What I like to do then is to use a static key lighting position that allows for the most flexibility.”

Nevertheless, a fixed front lighting position can pose its own problems. “A lot of times when we go to venues, especially the older vaudeville type houses, we have to hang lights in places that aren’t easy to access so you need a moving light you can focus without having an electrician doing crazy contortions to reach the barndoor.” Other times it’s a power issue. “I used to use a lot of 2K and 5k tungsten Fresnels to key the performers and running tons of cable took a lot of extra time that would have better spent elsewhere as most shows have to be up and camera ready in eight hours. Having an LED fixture like the Van Gogh really solves that problem when you only have to run a single Socapex run.”

Van Gogh
Working with lighting programmer Robb Jibson, Kasparovics was able to use the Artiste Van Gogh wash luminaires to get a nice even wash across the stage. “As a moving head wash fixture for camera, I really was impressed how consistent they appeared between fixtures; they all blended really well and the color temperature was dead on,” he states. “We had a 40-foot throw and dialed them down to 30% getting great shots on camera without the need for additional color correction. Having a wash fixture like that with fully controllable shutter and diffusion in a nice compact form factor makes the Van Gogh a very useful fixture in my designs.”

Using the fixture’s shutters, frost, and CTO corrected to 3400k, eight units provided key lighting covering the 20-foot wide stage from their FOH position. “Having the consistency and quality of light with a flat field all the way across and Robb quickly making shutter cuts off of soft goods made my job of building the stage look a lot easier.” With a choice of PC or Fresnel lens (both included with the fixture), Kasparovics chose the PC lens. “I did a shootout with both lenses and the PC lens won, giving me the best quality of light on camera. Having that option, which you don’t see a lot in other fixtures, was nice to have and it produced a great soft key light that looked great.”

Dartz
Another fixture the LD saw at the demo in Los Angeles that he says he wanted to find a project for, especially a television show, was the Dartz 360 LED beam/spot moving head. “As a visual effect, I like using multiples of the same fixture type in an array or grouping to get a fuller aerial look,” the designer shares, noting that in the past he has often used Sharpys or Platinum Beams to achieve that look. “For TV it’s harder to control the intensity with those fixtures; you have beam quality consistency issues, poor intensity control and forget about color mixing. What I really liked about the Dartz was that they were so bright for an LED fixture, so small, and have a beautiful range of colors you can mix and modulate. The low power consumption and tiny size also made it really easy to use as many as we wanted.”

Kasparovics placed 18 Dartz lined against the upstage scenic wall to project aerial beams over the comedian, a cohesive look that made for a beautiful backdrop during his set. “Having the compact package so you can put a lot of them on stage in view and not be in the way visually was nice,” he said. The Dartz executed a graceful fly out and coordinated chase for both the opening and exit cues while staying static in white with a linear dots gobo during the show. “The sharpness of the gobo in the beams, the consistency between fixtures and punch for such a little light was great and made for a slick look behind the performer. I was surprised at how well they read on camera and was skeptical about their output at first, but they pop really well and add depth and finesse to the overall design.” 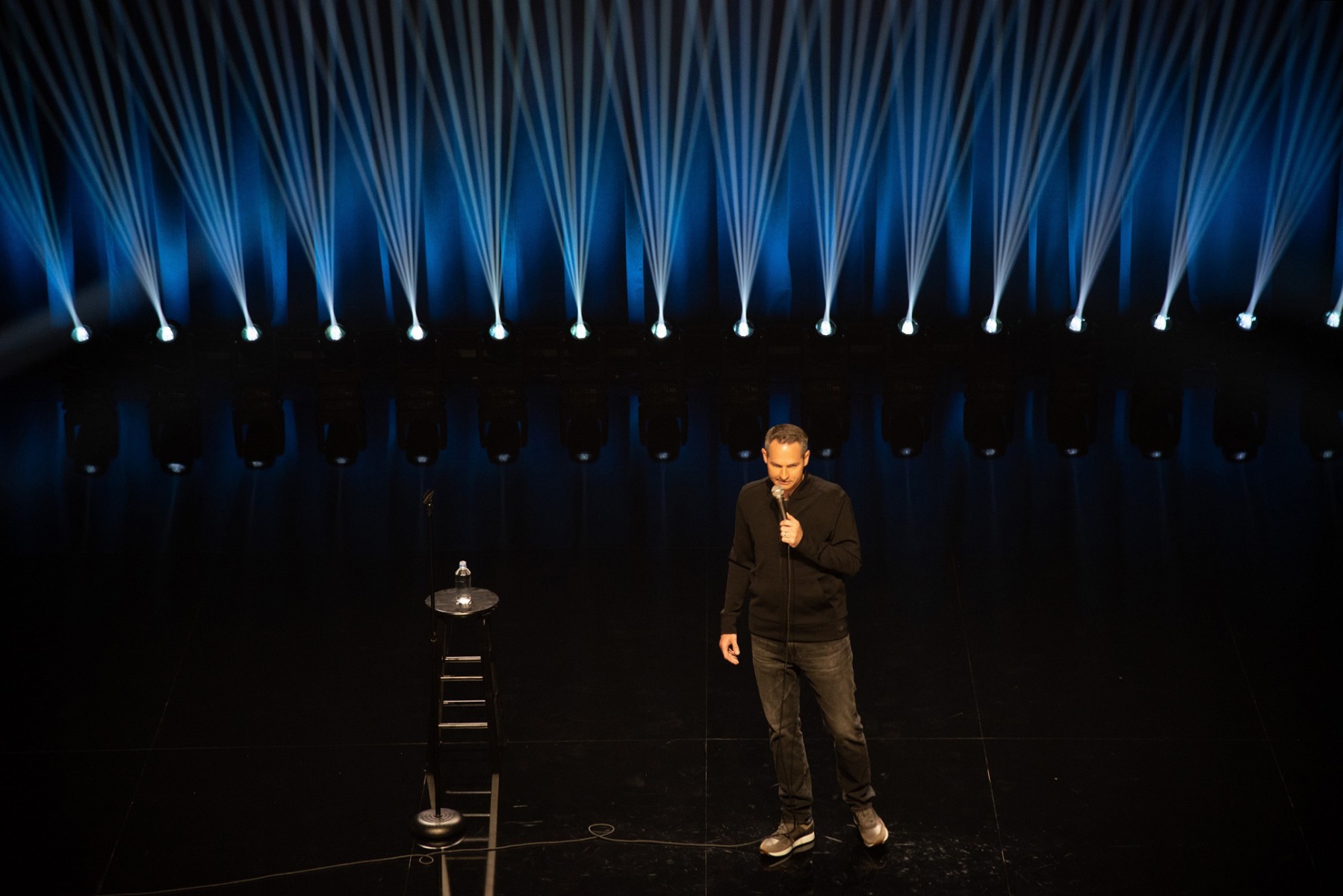 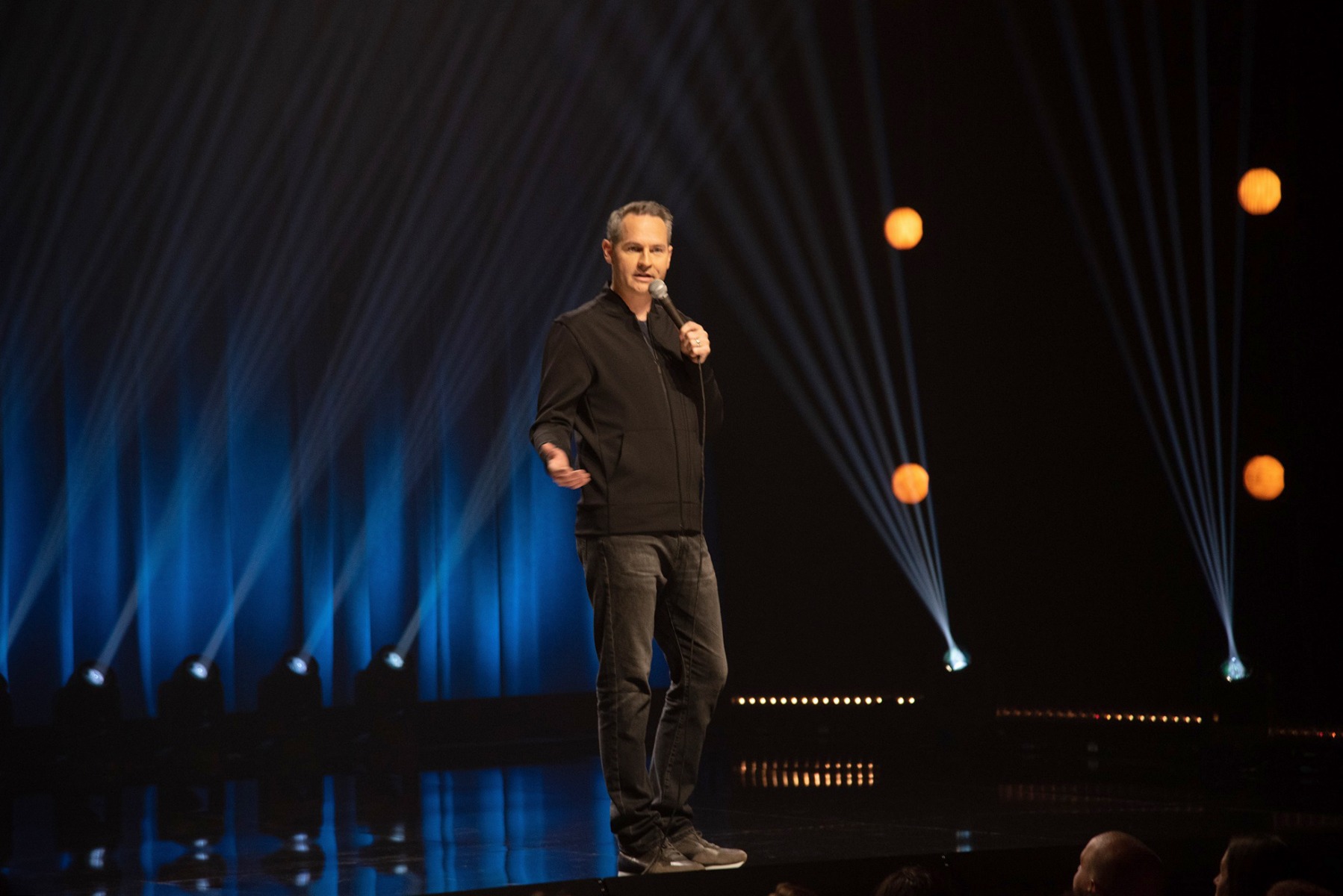 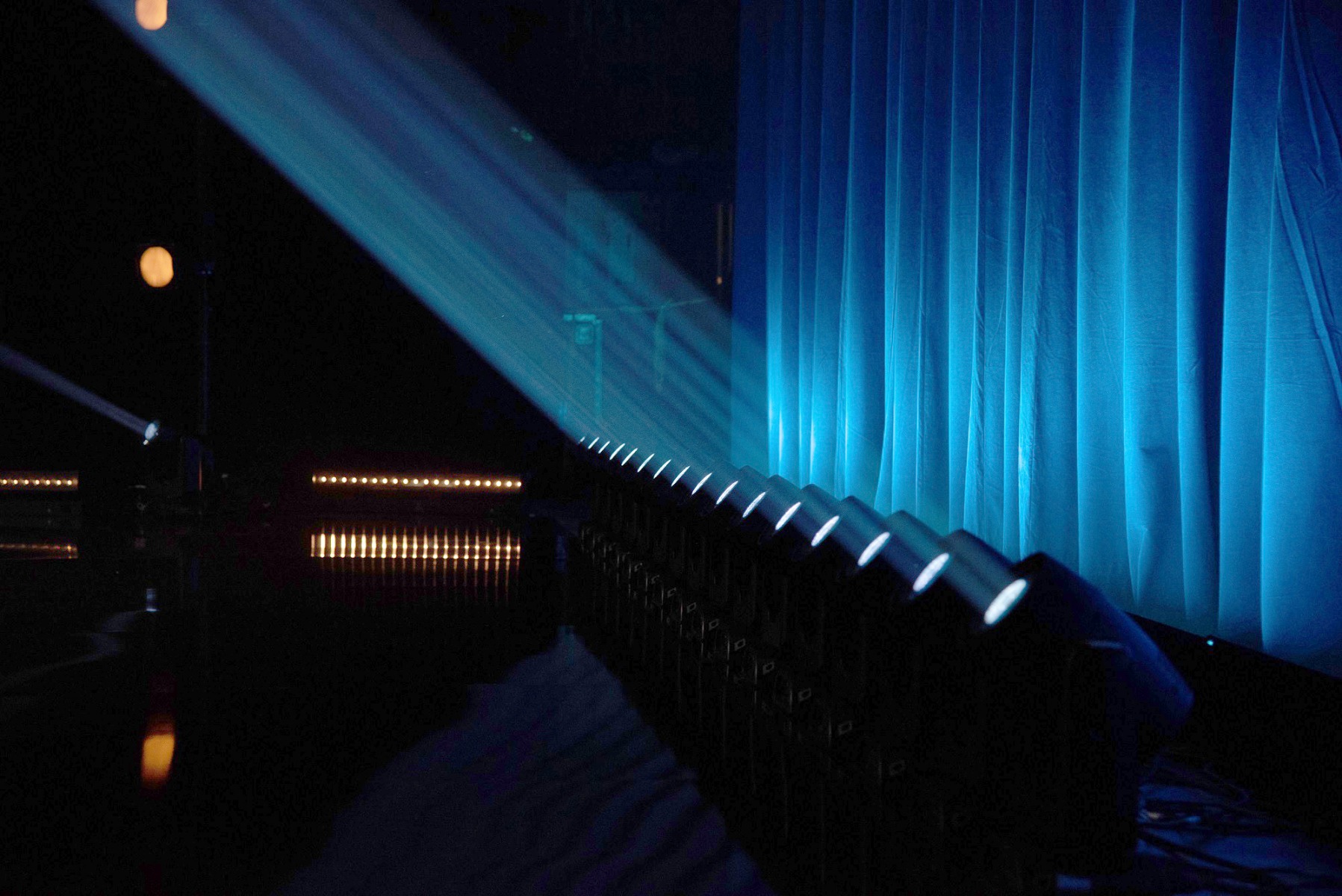