Each year, WinShape Camps attracts over 30,000 students to its Christian-led summer camps across the U.S. but like most outdoor camps were forced to cancel in-person events this year due to the Covid pandemic. In order to relieve the disappointment and give kids a fun and engaging experience anyway, WinShape has been working with Stacked Hearts Productions to create an engaging virtual experience that brings the fun of summer camp directly into homes. Through a combination of engaging video content and home-delivered packages, the virtual experience ON offers kids K-12 something new to explore every week.

The virtual experience broadcasts live eight hours a day, five days a week from a gymnasium on the WinShape campus in Rome, Georgia. Peter Streiff, President of Stacked Hearts Productions, a full-service events and production firm based in Atlanta, has worked with WinShape Camps for a number of years. He and his crew have stayed busy through the 5-week camp by broadcasting a morning show, an end-of-day show, worship segments, games and field activities, as well as Thursday night shows for K-6 and 7-12 graders complete with bands.

Three different sets
The segments are broadcast from three different sets – a performance set, host set and theme set – all purpose-built and housed within the gymnasium building. All three sets are lit using LED lighting from Elation Professional, along with other lighting, supplied to WinShape by Elite Multimedia of Nashville. Streiff and Stacked Heart Productions provided the primary set and lighting design for the three sets with a portion of the performance set design done by Scott Moore of Go Live Productions of Nashville.

Mike Marcario handles on-site lighting direction and programming and says ON has been both fun and unique as it requires many different looks and feels from the same rig. He explains the setup: “The morning show divides the set into three unique spaces – ‘host lower’ which is used for host games and host interactions with guests, ‘host upper’ which is used for the desk and interview segments, and ‘performance stage’ which is used for games and music performances. At times, all three divisions are used simultaneously with live transitions between them. The night show however divides the set even further, dividing the ‘host upper’ set into three spaces for various vignettes.”

Performance set
Most performances, whether it’s a band leading worship or dancers leading moments for the younger kids, takes place on the performance set. “When designing our performance set we talked about designing a dense matrix that, although simple, has a lot of dynamics to it,” comments Peter Streiff of Stacked Hearts Productions. “We chose the small ACL 360i™ single-beam mover and use 144 of those in a 12 x 12 matrix to really bring that space to life. It allowed us to build a lot of different concert looks, from a matrix wall to a low or high trim matrix ceiling. It has been so dynamic across the board and has been massively impactful from prerecorded elements to the real time stream. It shows that something so simple, when done well, can be a very dynamic, and strong element.”

The performance space uses a unique lighting floor package for each night show, consisting of varying combinations of Artiste DaVinci™, Platinum Seven™ and Rayzor 360Z™ fixtures. “I’ve enjoyed the Artiste DaVinci’s gobo selection, optics quality, low power draw, and brightness since I first used it two years ago,” Marcario says. “It’s only ever acted as a stage or floor profile on rigs on which I’ve spec’d it, but this gig is the first time I’ve used it in a key light application. Color correction and focus took very little time and was surprisingly consistent across all fixtures. That, in addition to its even field and frost, makes it a great choice for front and back light.”

It is the lighting director’s first time using the Platinum Seven LED washlight, a fixture he has found to be quite enjoyable. “It’s super bright, the cell and ring control makes for some fun eye candy, and zoomed all the way down the beam is quite punchy in haze. Having seven different LED chips also make it quite easy to balance color.” He adds, “I’m asking a lot out of every fixture in the rig due to all the ground and function they need to cover, and the Elation fixtures have performed quite well with very low maintenance.”

Streiff says the Artiste DaVinci and Platinum Seven have been good bread and butter fixtures on the project. “We spend a lot of time going over the entire rig, changing looks and balancing things out,” he said, noting that they change the look every week using a back stock of DaVincis and Platinum Sevens as they need them. “With the LED fixtures, the ability to dial in color temperature fixture by fixture to get a nice balanced look for camera has been really beneficial. With the Artiste, the textures we can get from the gobo selection is excellent and their ability to play well on camera has been great.”

Host and Thursday night sets
On the host set, a flexible studio space that hosts a lot of the younger kid programming, rich colors from fixtures like the Rayzor 360Z moving head wash help give it a classic TV studio feel. “It’s a very colorful set and the ability of the fixtures to pull the color out of the set and look good on camera has been great. They play well as far as color temperature and enhancing the set,” said Streiff, remarking that it’s been a blessing to not have to fight with fixtures to try and make it look good. For the Thursday night late night show, Pixel Bar 120IP™ LED battens dress the house band set.

Low power draw
Although the gymnasium is large enough to house such varied sets, working with over 360 lighting fixtures plus LED panels in a building that is not a dedicated production venue meant Streiff had to deal with both power and weight limitations. “It’s good to have LED for the lower power draw,” he says. “Our entire service for the building is 200 amps so working within those parameters, making sure our power isn’t overdrawn and we’re not blowing circuits in the middle of a broadcast, has been a very critical piece.”

Blessed to provide jobs
With production and live events battening down the hatches to weather the Covid storm, Streiff says he has been glad for the project and delighted to provide work for a professional crew, as well as college student staff, albeit on somewhat short notice. “We got the call at the end of April and five weeks later were loading in so it was a tight timeline,” he said. “We are thrilled to be supporting the organization again and with the state the industry is in are blessed that we can provide jobs right now. It’s been a real blessing to be able to call vendors and techs that we partner with and offer them seven weeks of work.”

Tom Wilson and the Elite Multimedia Team has provided excellent service to support the project, Streiff says, and delivered a well-installed, low maintenance rig. Mike Marcario acknowledges Gretchen Reed and her team at Elite Multimedia for their excellent work, not least the quality control of all the fixtures. “We’ve had very few gear malfunctions or failures, and a lot of that can be attributed to the shop staff,” he said. “Jason Blasing is my L2, First Electric, and keeps the rig at 100% at all times, which is impressive for one of its size. Finally, a huge thanks to Peter for having me on this show. He and Scott Moore at Go Live conceptualized a killer set and lighting design, and it’s a pleasure to create with it every day.”

By all measures, the WinShape Camps ON, a virtual summer camp, has been a success with good attendance and many kids signing up for a second or third week. Streiff concludes, “It’s nice to see a lot of kids engaged in what has been a tough season for everyone, and it allows parents to organize part of their summer as well. It’s been a great experience to be a part of.” 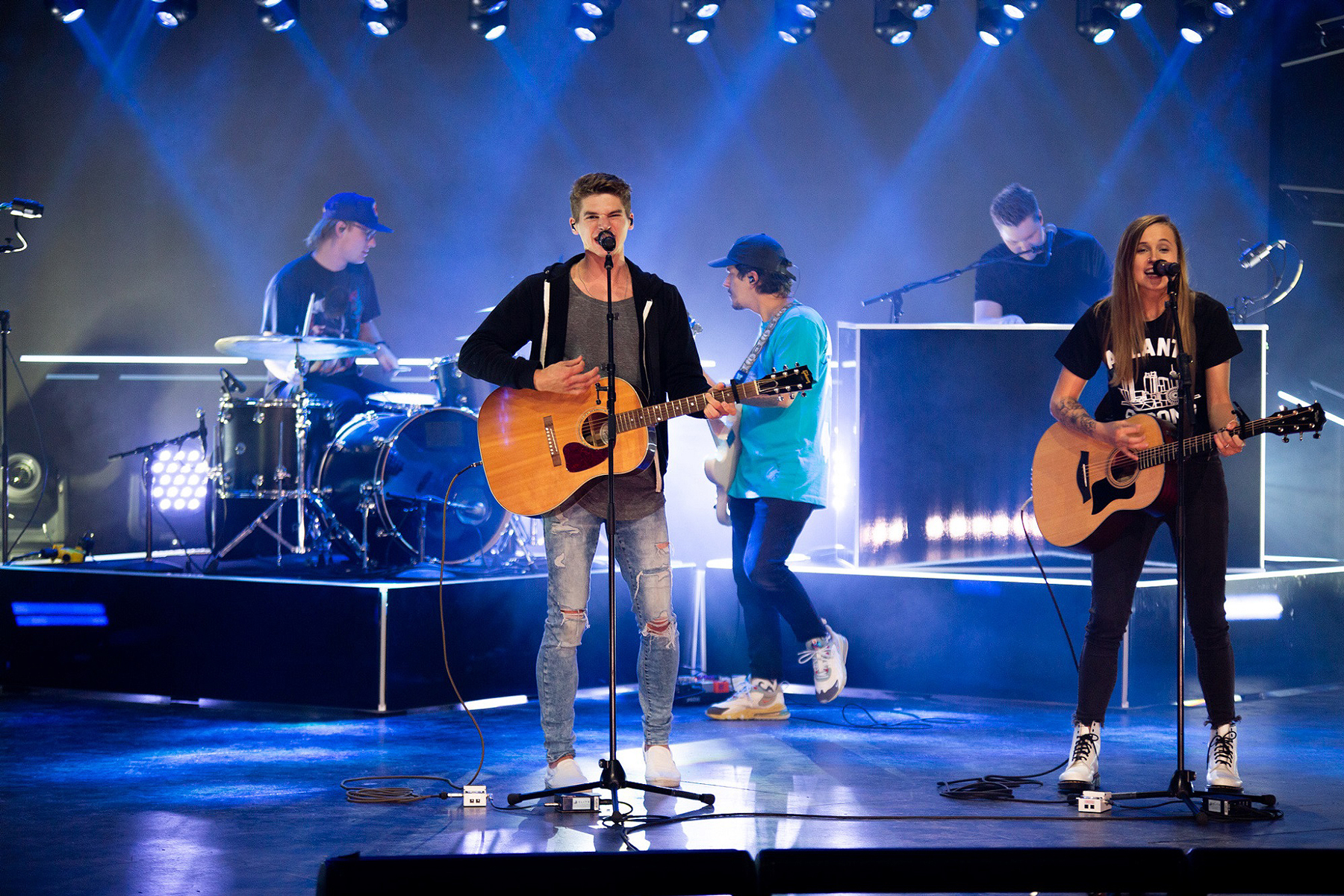 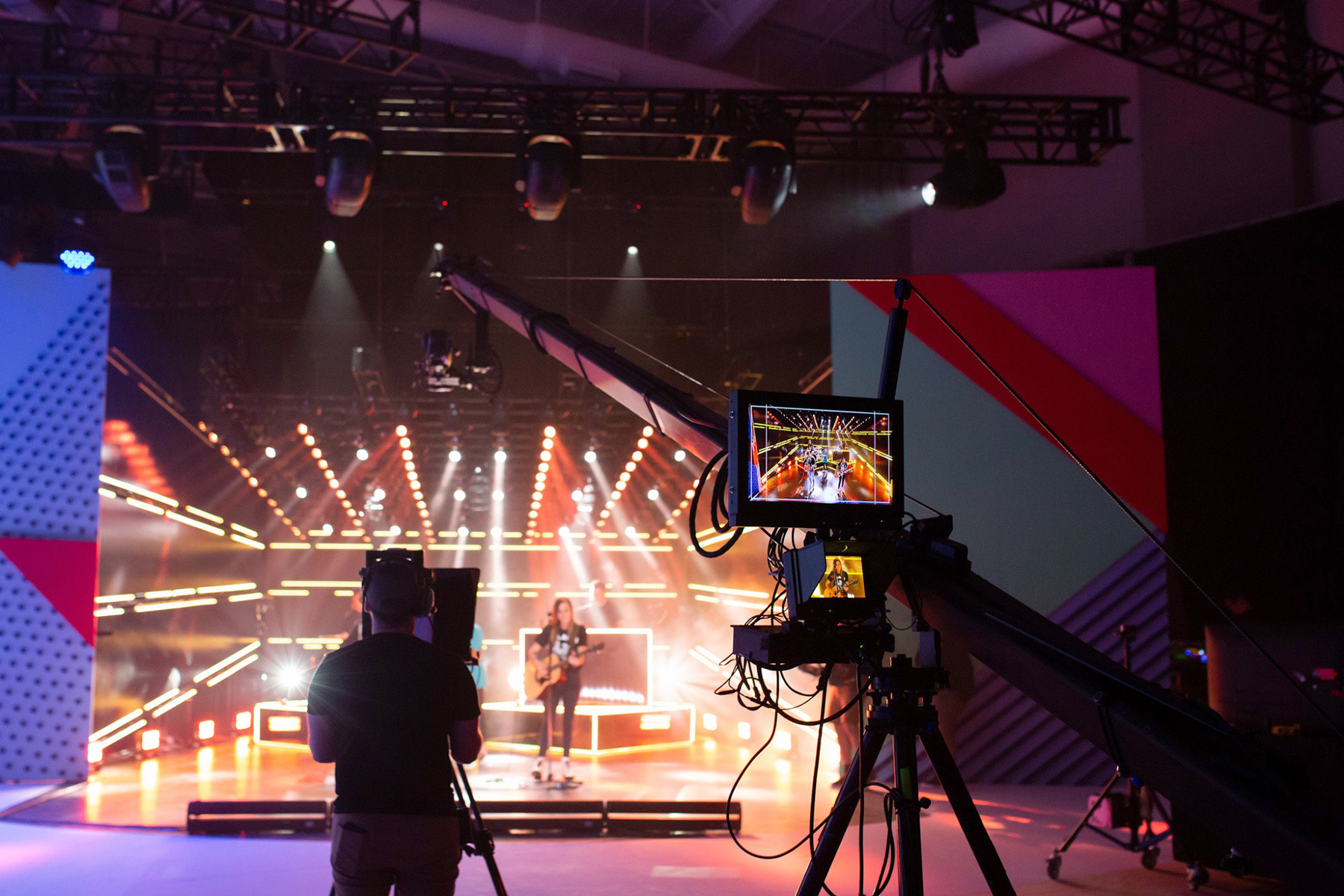 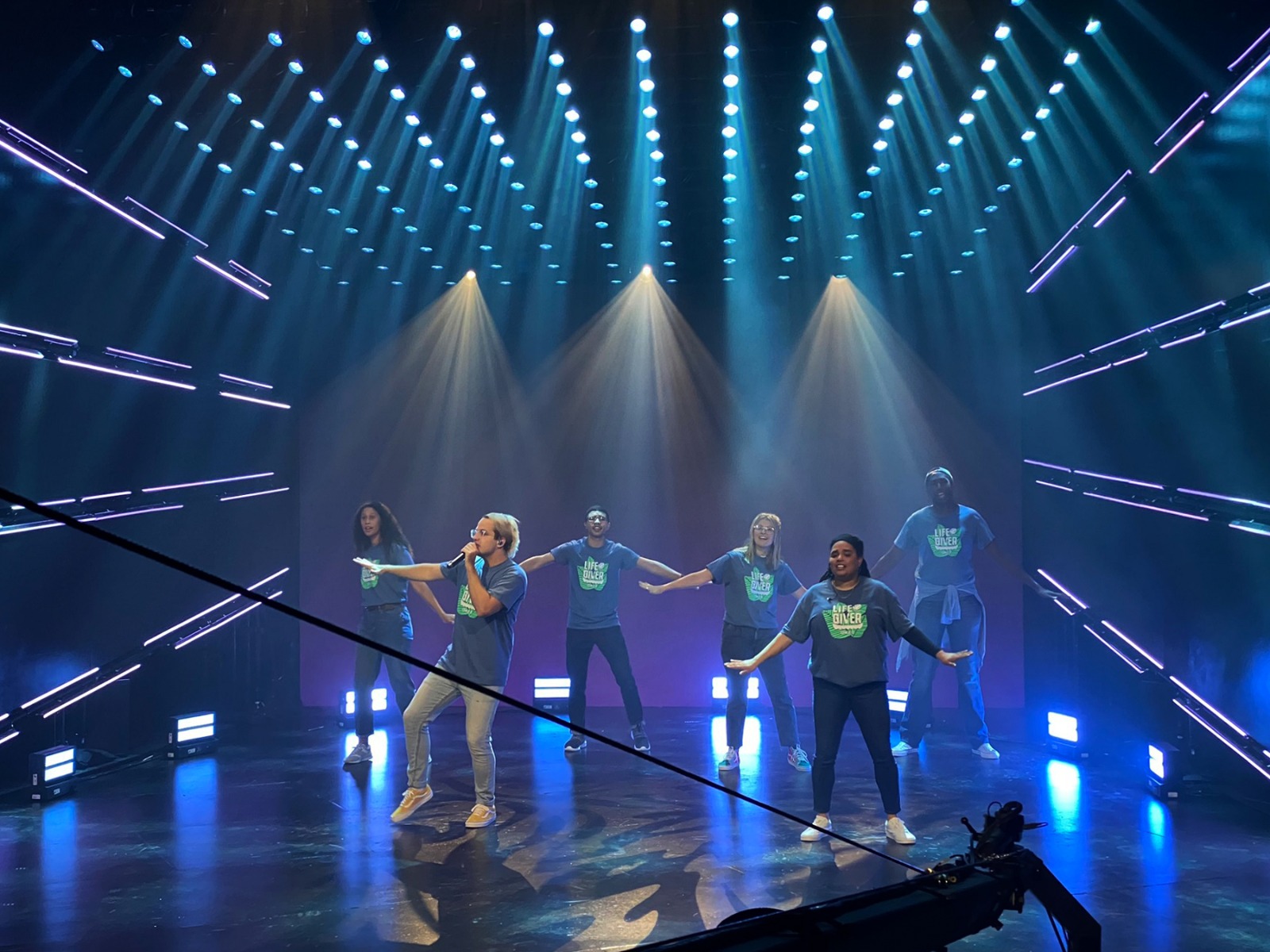 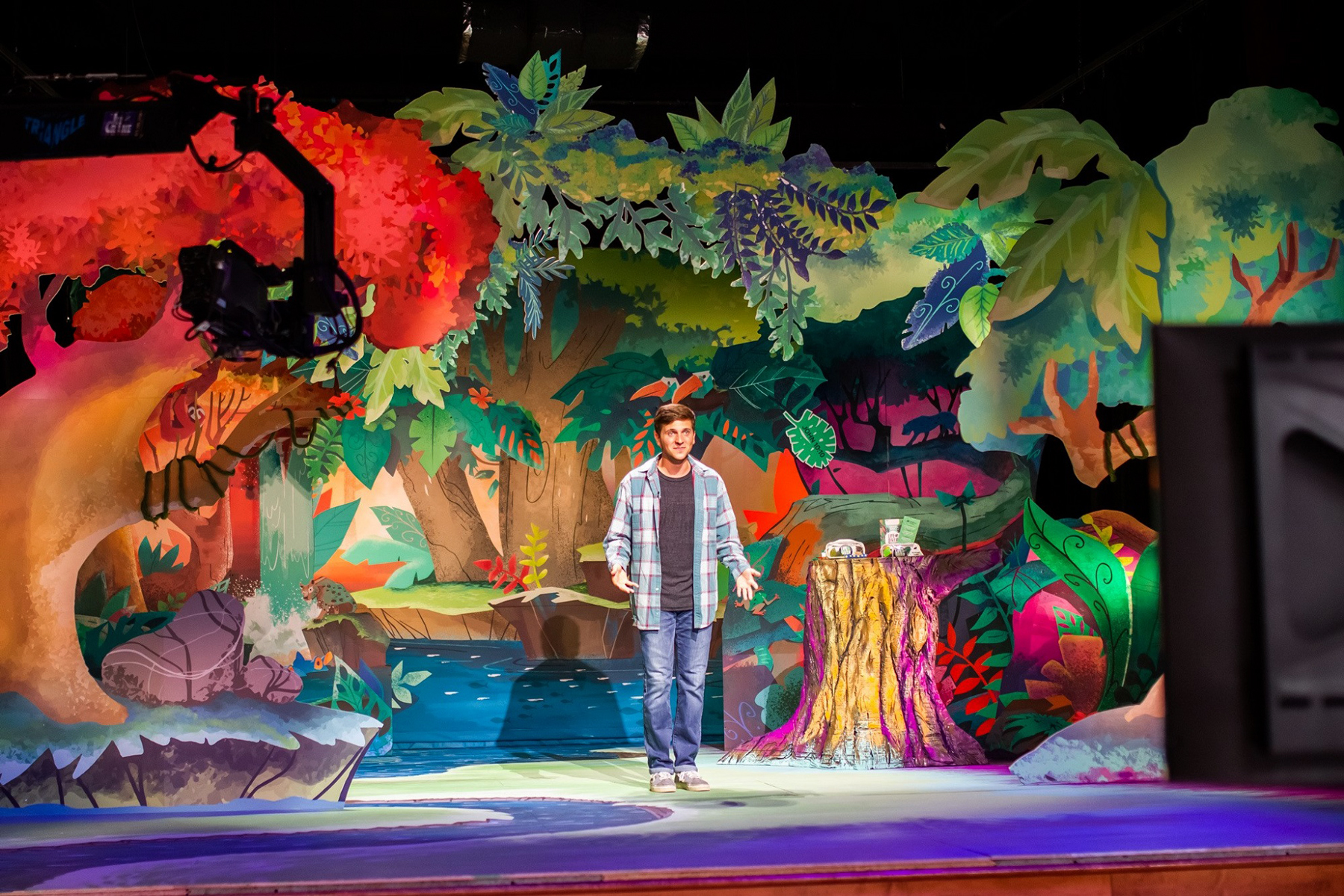