After years of lighting Ryder Cup press areas with standard Lekos and PARs, the team at NMR Staging and Events decided to add Elation's dynamic and broadcast-quality KL Panel LED softlight to their bag and the results were impressive.

NMR has been involved in the Ryder Cup for years, the Professional Golf Association's biennial men's golf competition between teams from Europe and the United States. This year's event played out September 24-26 at Whistling Straits Golf Course in Wisconsin, and, as always, the rivalry and its post- match press conferences were followed closely on both sides of the pond.

NMR, who has nearly 40 years of experience providing technology for a wide variety of events, purchased the full-color-spectrum and color temperature-adjustable KL light panels last year for use on tradeshows and NMR's in-house studios. Daniel Gerstenhaber, head of lighting at NMR, says the lighting crew there liked them so much they bought additional luminaires to light this year's press events at the Ryder Cup.

"We needed to project a nice, flat field of light for the main interview area, something that could deal with the ambient light levels of the open press tent," stated Gerstenhaber, who handled lighting design for the Ryder Cup press area. "It's a tough situation with throw distances and the beating brightness of the sun. With the KL Panel we were able to adjust color temperature on the fly and the output proved to be more than enough."

Housing a 295W RGBW + Lime + Cyan LED array, the KL Panel outputs 24,000 lumens from a small form factor to produce wonderfully soft white or full-color washes. Color rendering is of the highest quality with a CRI above 95 and the unit is adept at matching the white balance for camera through a green shift adjustment and virtual gel library.

Ryder Cup press conferences are always interesting, and often entertaining, and this year's post-match interviews proved to be must-watch TV, especially Team USA's celebratory meeting with the press after claiming the win. An important aspect of the lighting was its ability to work with the high-speed cameras. "Not only did the output need to be bright but we needed to ensure there was no flicker so we needed something that could easily adjust the refresh rate frequency and the KL Panel could do that." Virtually silent, the KL Panel is fully optimized for broadcast with 900-25000Hz LED refresh rate adjustment.

A small but talented on-site crew that Gerstenhaber says included only a few techs handled the Ryder Cup press events. NMR's Ed Conrad served as production manager and took care of all on-site needs "Another important quality of the KL Panel is that Elation has made using the light easy via the encoders and intuitive menu system. It's a light that even those less familiar with how to operate one can use effectively," said Gerstenhaber. Control options of the KL Panel include DMX, Art-NET and sACN and handling is made even easier via manual control of intensity, color temperature, green shift and other settings via encoders and OLED display conveniently located on the bottom of the unit.

"I think it is the best fixture that Elation has made," Gerstenhaber says straight out. "Not only is it well made and of high quality, it's a fraction of what some other companies charge for a similar fixture which means it's paid for itself quickly. It worked out well for this event and from all accounts, everyone was very happy with the Cup!" 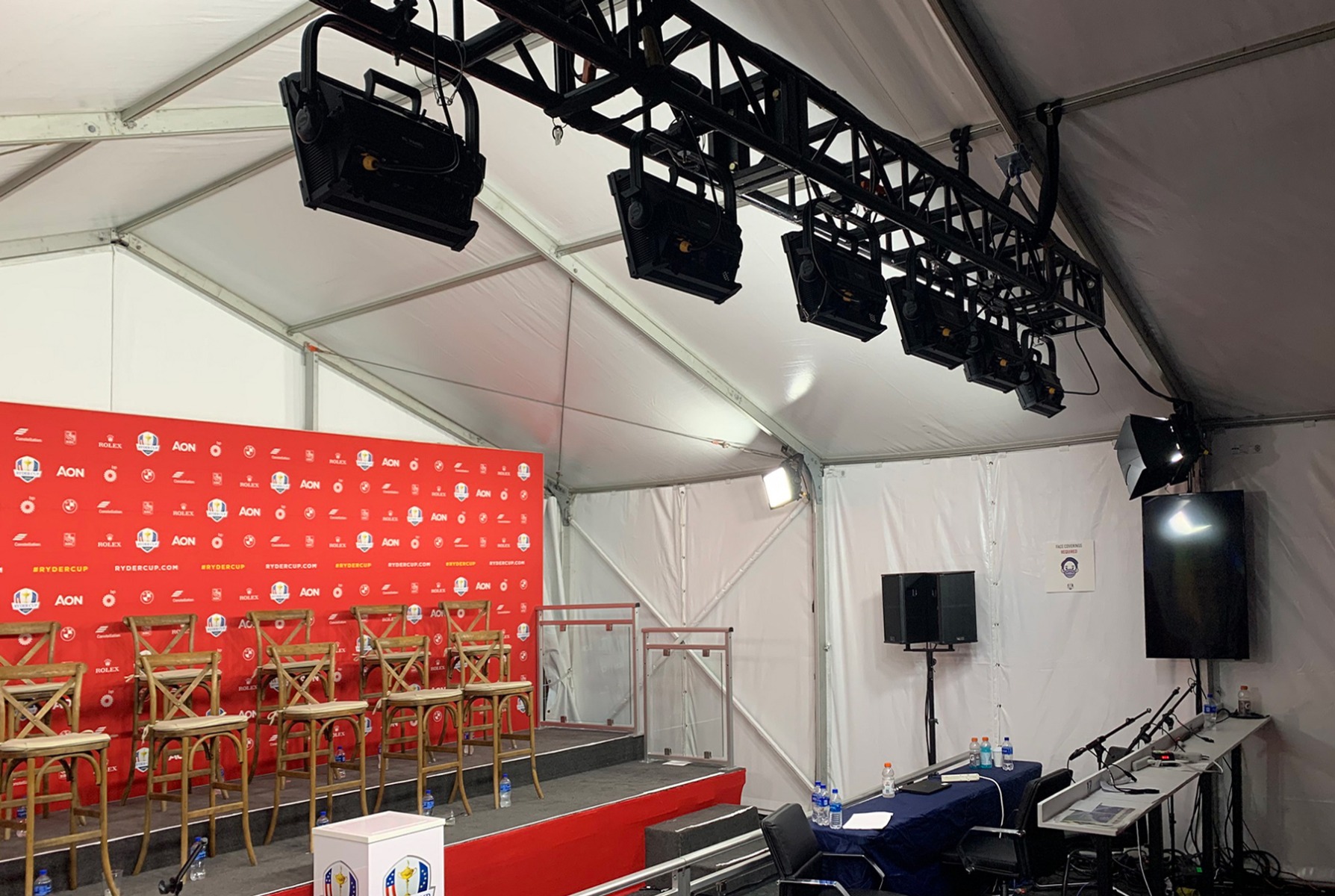 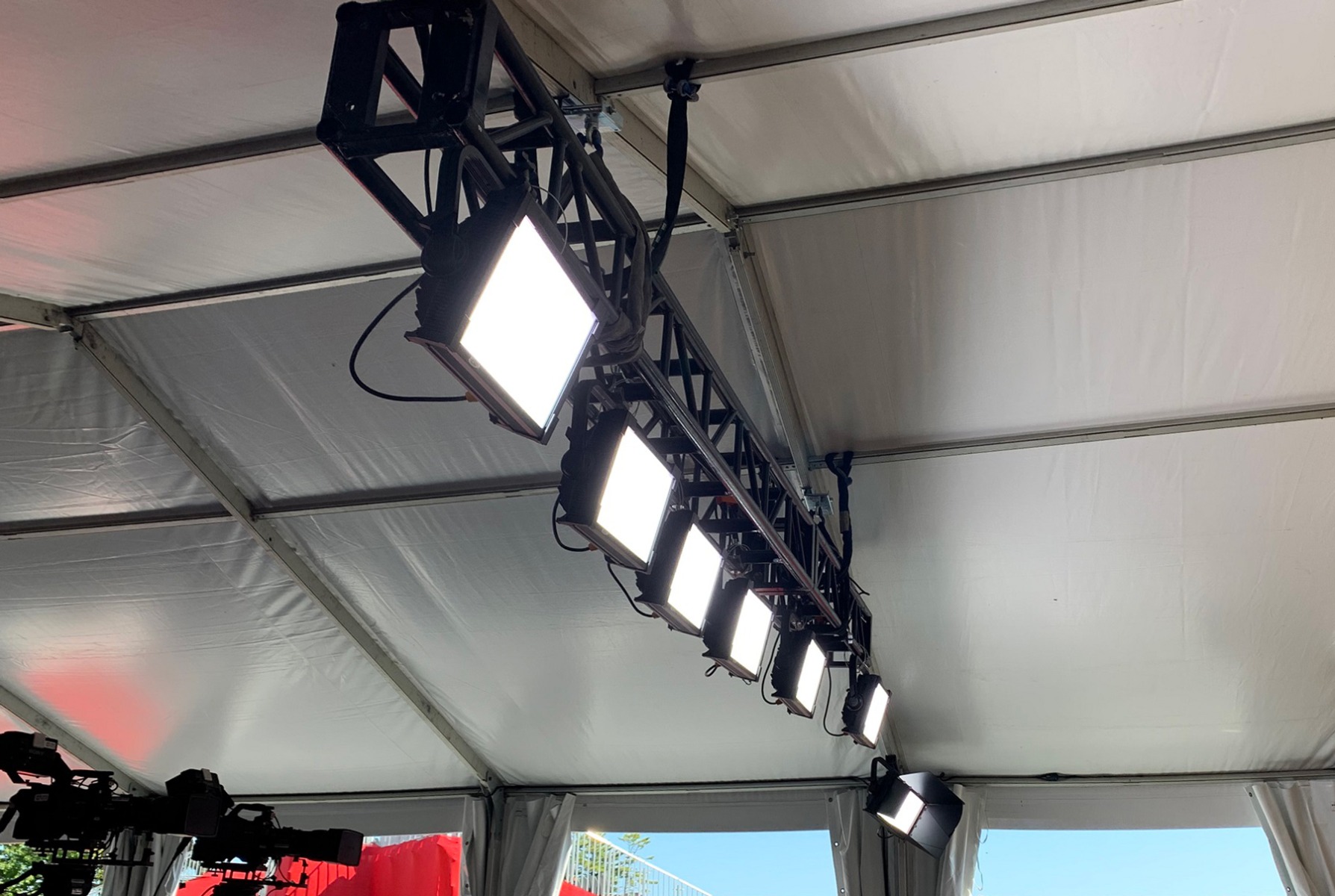