Some of the only ticketed live concerts in New York State in recent months took place September 30 - October 4 on Bannerman Island, a 7-acre isle with a colorful history that lies in the middle of the Hudson River 50 miles north of New York City. "Illuminance," a fundraising concert by the Daisy Jopling Band, received special permission from the State of New York to hold five nights of open-air concerts amid the natural surroundings and magical ruins of Bannerman Castle.

Daisy Jopling is a classical/rock violinist who tours with her own band and also runs a music mentorship foundation. "Illuminance" featured performances by the Daisy Jopling Band, Michael Feigenbaum, Sal Lagonia, and local youth musicians with proceeds benefiting the Daisy Jopling Music Mentorship Foundation and the Bannerman Castle Trust. Five days of sold out shows, two shows per day with 20 lucky guests per show, were lit by New York City Lites using a lighting package of Elation Professional IP-rated luminaires.

Logistic and weather challenges
Deke Hazirjian and Jimmy Lawlor of New York City Lites served as lighting designer and associate lighting designer respectively on the project. Hazirjian, President and Senior Lighting Designer at the company, was approached by the Bannerman Castle Trust to light the concert series. Having worked on Bannerman Island before, in 1998 and 2007, he knew well the difficulties working on the island presented. "The island is literally a rock in the middle of the Hudson River and poses a number of challenges," he said. "The terrain is rugged and there is no electricity on the island so the only way to get power is to bring in a generator. Weather can also be a big problem and storms can blow in with little notice. I had worked there before and knew what I was in for so we made sure we had the right gear."

Proven IP range
The weather issue proved one of the easier challenges to overcome as Hazirjian and Lawlor went with Elation's proven range of IP-rated lighting, notably the company's multi- environmental Proteus series. "With a limited crew and two sites 300 feet apart with a vertical elevation of 75 feet between them, we knew there would not be time or manpower to cover and uncover lights so equipment with an IP rating was a must," said associate LD Lawlor.

Besides lighting that wouldn't get ruined in the weather, Hazirjian says they needed lighting that was functional enough to use for multiple purposes - wash, spot, and beam - but also something that could light architecture as well as band members. "It was a challenge to work in that environment and we needed lighting that could be adaptive. We would start with one plan and change to another. We had to adapt and change to the environment and to the challenges we had before us. We did very well and folks were very pleased. People were wowed by the show but also amazed that we got that much equipment up the mountain."

Proteus series luminaires chosen for the project included Proteus Hybrid™, Proteus Beam™ and Proteus Rayzor 760™ moving heads, along with IP65-rated Fuze PAR Z120 IP™ LED Par lights. All of the Elation gear was provided by BML-Blackbird except the Rayzor 760s, which came direct from Elation.

Three illuminated areas
The lighting system was used to illuminate three areas: the Bannerman Castle, a ruin on the north side of the island that once served as a military surplus warehouse; the castle residence (now a museum) that lies higher up on the island; and the performance stage itself with five-piece band and dynamic lead violinist. The original thought was to hold the concerts at the Bannerman Castle but after a site survey, the decision was made to move the event closer to the residence and use it as a backdrop.

One of the major challenges was to get equipment and power distributed on the island and working to those three areas. All gear was transported by barge, unloaded and hauled to the castle and residence sites through a forest and up a crumbling stone staircase. The power issue was solved by crane-loading a generator onto the barge and tugging it down the Hudson to the island. After lights, trussing and cabling were unloaded, the barge with generator sailed to a different part of the island and could only dock at high tide. Leader cable runs to distribute power totaled over 1000 ft. with considerations made for the island's 3-foot difference in high and low tide.

Bannerman Castle
The castle ruins, because of the distance away from the stage, was its own autonomous system of lights completely separate from the residence and stage system. Here, working with LED strobe wash units and LED pars, multi-functional Proteus Hybrid IP-rated arc source fixtures textured the mystical, broken down facade while highlighting the "Bannerman's Island Arsenal" legend on one side of the ruin. "We did a nice lightshow on the castle ruins which looked great," said Hazirjian. "It added to the special atmosphere and was a great spot for guests to take photos after the show as they made their way back down to the boat."

Residence site
Up at the residence site that played backdrop to the shows, Proteus Hybrids were used as followspots and key light for the performances with several units positioned behind the stage for air effects behind the band. "Behind the stage where it falls off into a multistep garden we placed a truss on the ground that held Proteus Hybrids," Lawlor says. "We needed something behind the band, something to give visual interest, so we lit some of the trees with static pars but then added some movement and interest with the Hybrids."

Lawlor had worked with the Proteus Hybrid on the play Hercules at the Delacorte Theater in Central Park in 2019 and had confidence they'd do a great job. "I knew the fixture and knew we wanted to use those. I remember my biggest concern at the shootout in Central Park was that we would bring down one of the helicopters that fly over the Park it was so bright!" he quipped. "On Bannerman Island, we had to be very judicious about where we used them as we looked on them as our best light." Lawlor says that the original idea was to do more air architecture with them but as they adapted to conditions at the site they realized they needed to use them to light performers so they became their followspots and main backlight idea behind the stage. IP-rated Proteus Beam arc source fixtures with their tight 2.5° beam aperture handled those air architecture looks.

Live and for video
NYC Lites and Hazirjian have a long and successful history of broadcast lighting. With several Emmy nominations and one win to his credit, Hazirjian's work can be seen daily on America's leading networks. On Bannerman Island, with nine cameras, two of which were drones, filming the Daisy Jopling shows for a later film release, the video audience was just as important as the live event.

Proteus Rayzor 760s, a compact IP65-rated LED wash luminaire, played a key role in both the live and on-camera looks. Used for side and front washes onto the band, they also bathed the residence in complementary color, the main backdrop for the band. Fuze PAR Z120 IP fixtures, single source LED wash lights mounted on the residence roof, provided backlight for each individual musician. Lawlor says, "That way we could do something over the stage with the Proteus Hybrid and then pop the musicians with the Fuze Pars."

The X factor
The X factor of course was the weather, which for the most part was outstanding with a brilliant full moon and starlit autumn sky most evenings. There was one exception however. "We were lucky with the weather" Hazirjian says, "but we did have one day where it rained three inches. After it was over everything started up just fine and worked perfectly. Not a light was out which was unbelievable! We thought, thank God we went with IP fixtures." Lawlor adds, "If we would have had to go with non-IP fixtures I'm not sure how we could have made it happen. We would have had to make some of our lighting ideas lower priority and if we couldn't have lit the castle or residence that would have had a big negative visual impact so it was great to have reliable gear."

It felt terrific!
Hazirjian reports that the five days of shows went well with the cameras getting the content they needed for the film and Daisy and the band very happy. He sums up. "This wasn't an easy project but it was also quite rewarding. The logistics of just getting there, loading the barge with gear, putting a generator on it, having a tug take it down river, and hand carrying every light and cable onto the island and to the top of the mountain, was incredible. The amount of work for five days of shooting was tremendous but we were glad we could do it. None of us had worked in a while, the band was thrilled, and it was the first time our crew were hands on with lights since March. We were exhausted in the beginning because we weren't used to the work but it felt terrific!" 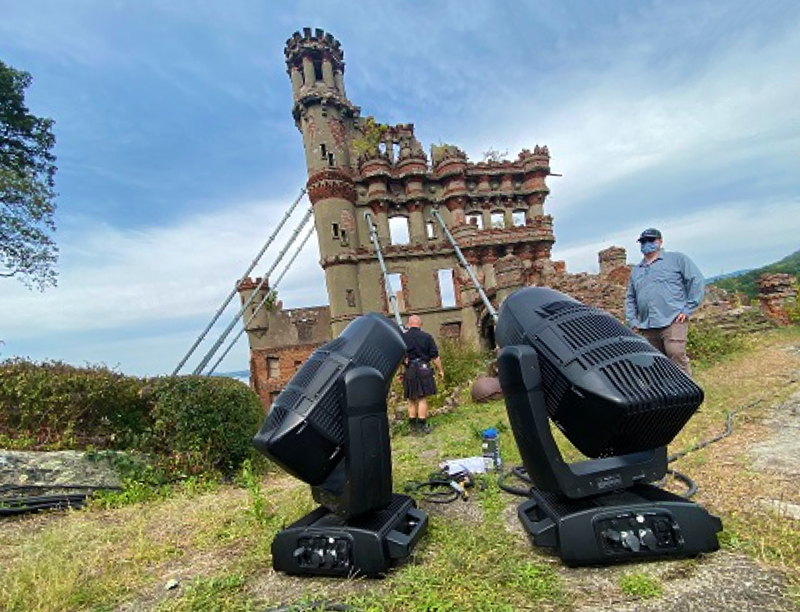 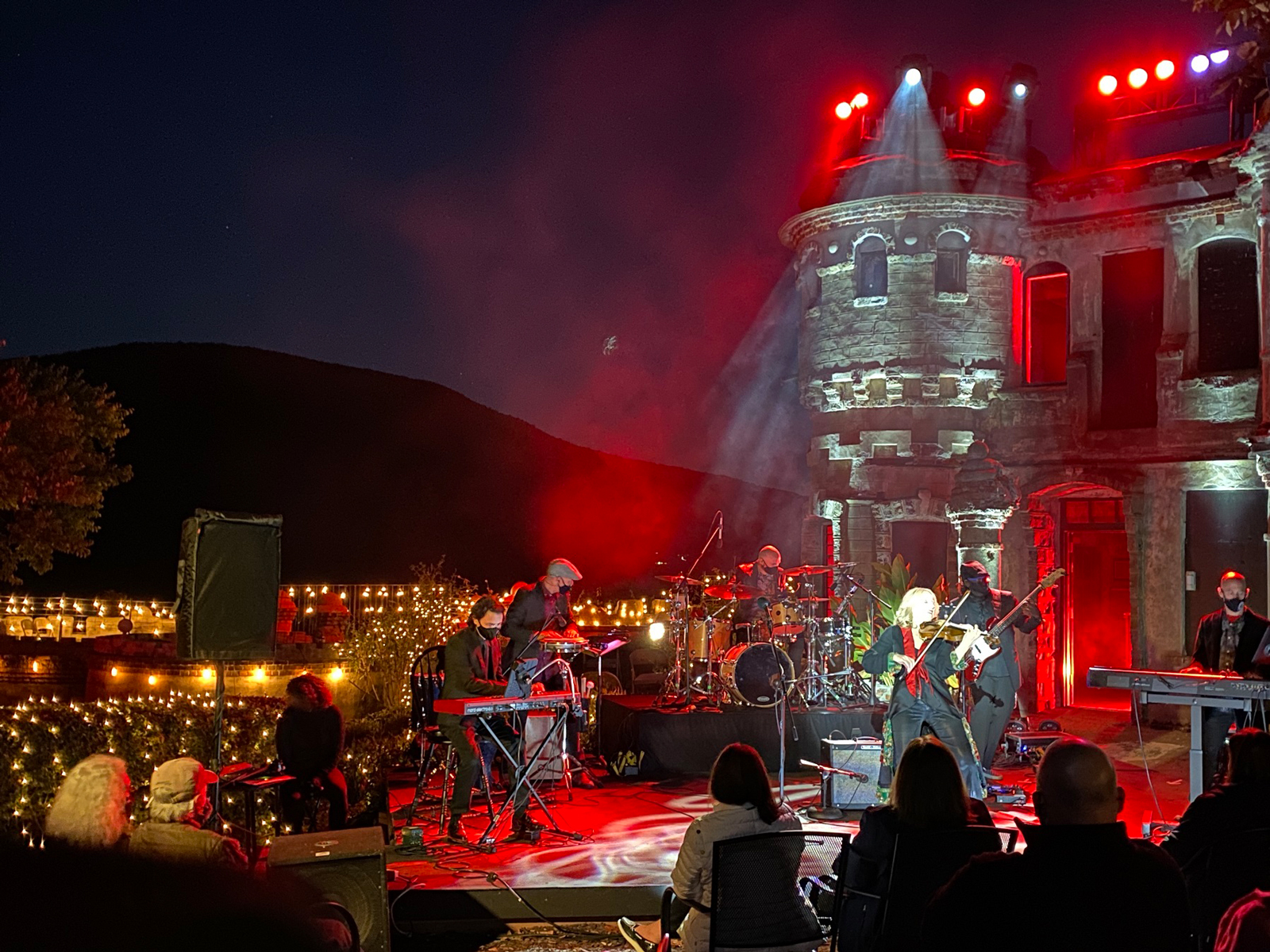 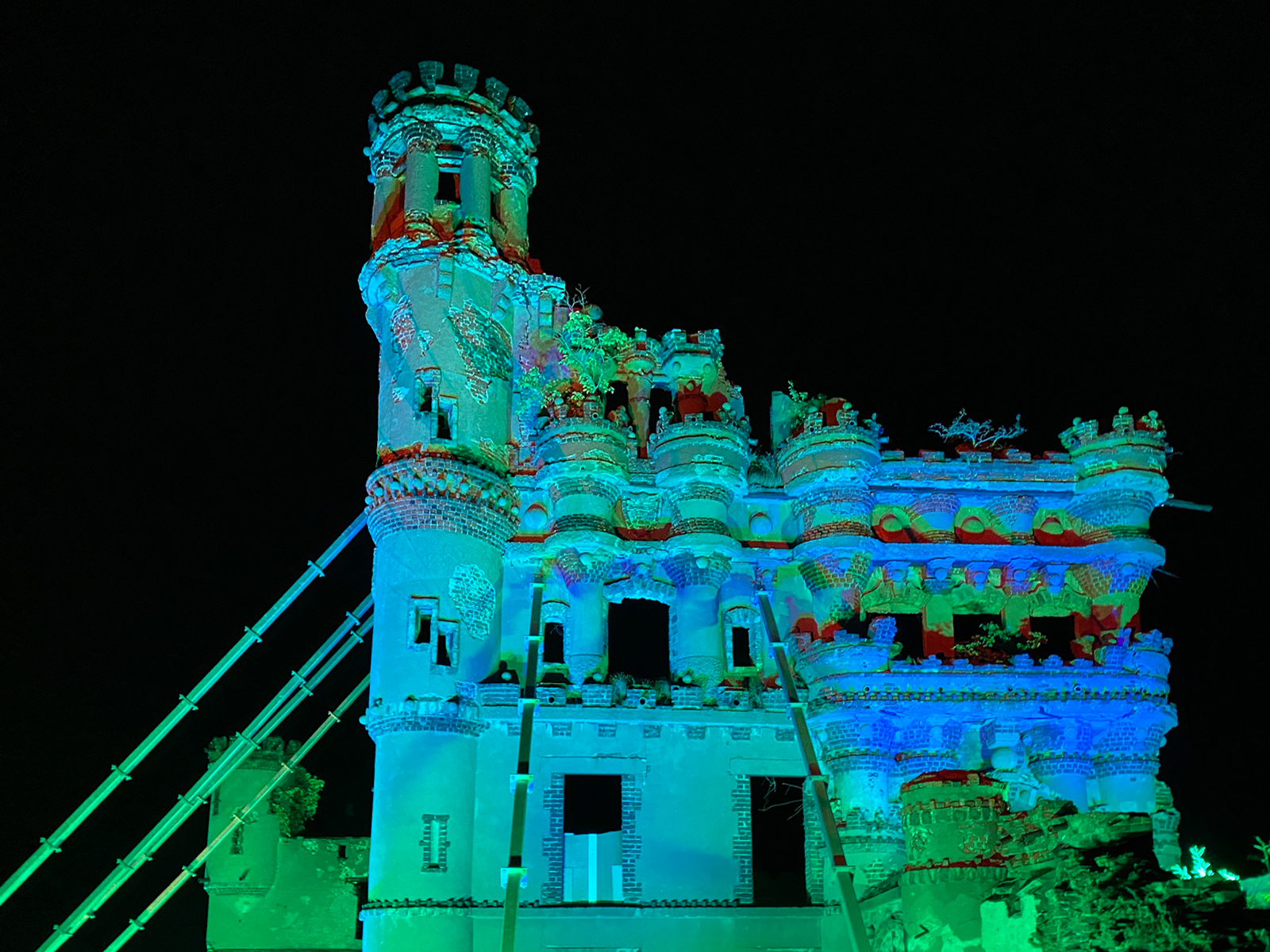 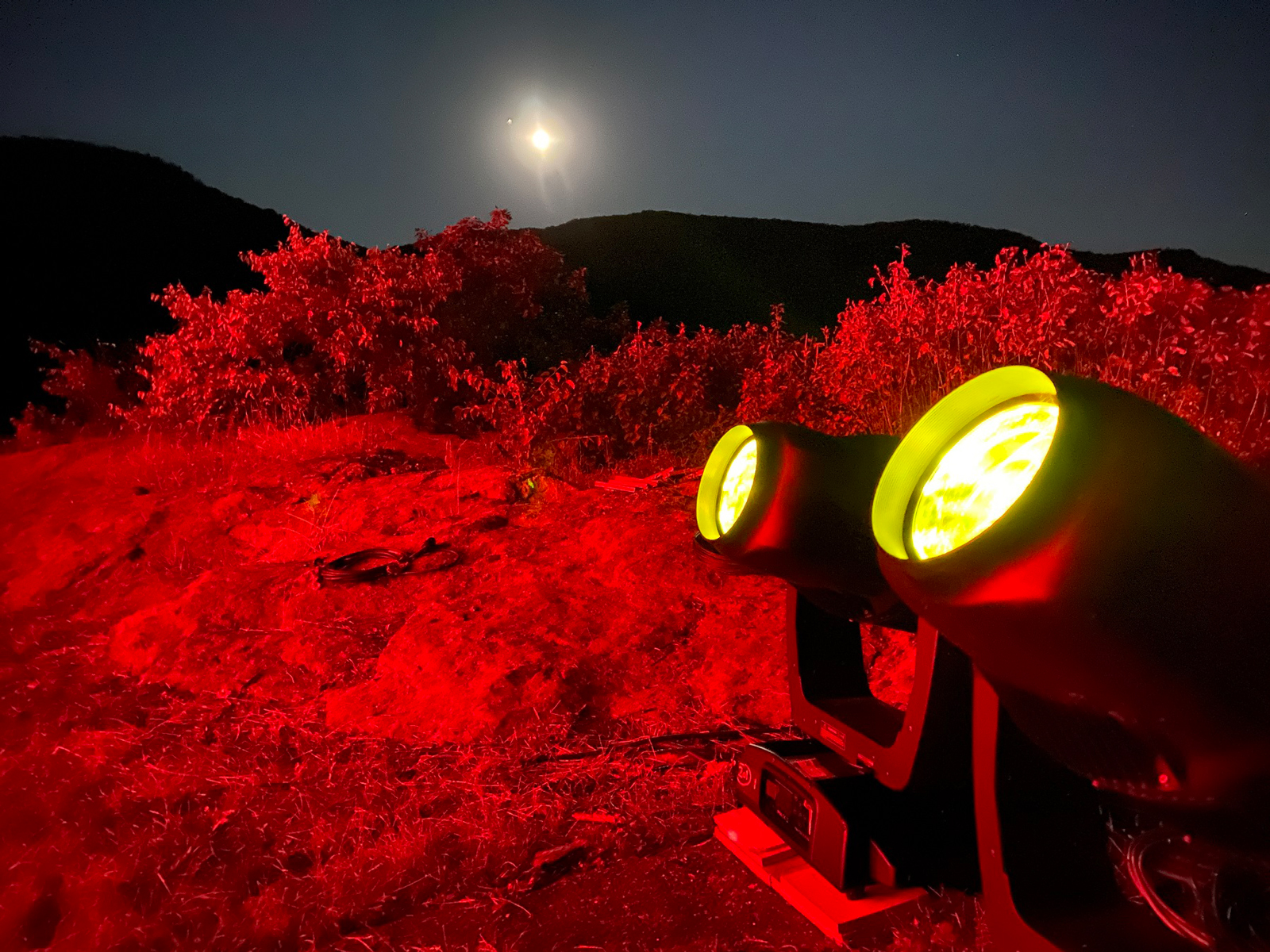