Involved with theatre since childhood, Tony award-winning lighting designer Jeff Croiter has had both a successful and eclectic career and still finds inspiration in his art. With Broadway in the dark and time on his hands to pursue new interests – it is gardening season after all – this top LD took the time to answer a few eclectic questions of our own.

COVID-19 has wreaked havoc on our industry and we all hope that recovery will come sooner rather than later. Do you think this will have longer-term affects on theatre in New York?

That depends on one’s definition of long term.  The immediate impact is evident.  At some undefined point in the hopefully not so distant future, we will have permission to be in rooms with other people again.  Whenever that occurs - anticipating the likelihood of a slow roll - people are going to want to interact, go to restaurants, enjoy live entertainment.  Large crowds may be scary to people at first, and some won’t want to spend the money.  I must think, and I emphasize “must”, that once a vaccine for Covid-19 is available and the economy finds its footing, there will be a return to something that resembles normal.  No predictions on how long it will take but believe it will happen.

How has your work been affected and are you working on any projects at the moment?

Yes. Definitely. The first preview of Whisper House was supposed to be the night NY shut down large gatherings. That show and everything else I had running was either postponed, canceled or put on hold. At that point, I held out hope that my May projects would happen. They will not. Nothing that had been scheduled for April or May is happening on their original timetable.  I’m still waiting for word on what will be rescheduled.  Some will.  Preproduction for projects in the fall is commencing.

I read that both of your parents were active in the theatre community. Did you get involved in theatre with them as a kid and did you know already then that theatre was for you?

I was very involved in theatre as a kid, in all aspects, including performing.  I had many other activities and interests as well: sports, music, friends.  For a brief moment in time, I thought maybe I wanted to be a musician when I grew up.  (More accurately, a rock star.)  Then I became involved in lighting and was better at it than any sport I played or instrument I picked up.  Looking back, I think part of me enjoyed that confidence.  This is now junior/senior year of high school and I still wasn’t sure I wanted to make a career of lighting.  I don’t think I was really sure until my junior year of college.  Even after graduating, it wasn’t until my late twenties, that I fully committed.

Do you think that exposure to theatre at such a young age has given you any advantages?

None that I can specify.  It created deep and lasting affection.

You have an impressive list of design credits to your name - Freestyle Love Supreme, Peter and the Starcatcher, Newsies, Something Rotten, Bandstand, Falsettos, Holiday Inn, Beyond Babel. From design day one to the final curtain on closing night, what is your favorite part of the process?

I have a lot of favorite parts; that is the truth.  Since you are asking me to choose, I will say, the first rehearsal after the first preview.

Late last year, you used Elation’s Artiste Van Gogh LED wash moving head to fulfill a number of roles on Cyrano at the Daryl Roth Theatre in New York. Have multi-functional luminaires aided/changed the design process at all? Have they changed your approach to lighting?

Multifunction fixtures have not changed my approach.  Yet.

What percentage of your plots these days is made up of LED lights?

Each project differs vastly so there is no way to enumerate.  It has been years since I last did a show without LEDs in the light plot.  If I had a choice, all moving lights in all my shows would be LED.  And anything that lights scenery.  Budget and availability often dictate.

What can LED still not do well?

They have trouble with constancy, specifically, for me, when it comes to color and intensity.  Some are, obviously, better than others.  And a universal, standard color mixing protocol would be nice.  I don’t know what that looks like.  What I do know is that color takes too long.  It’s a console/control problem too.

When does fixture choice enter your head? Is that something you think about right away when you begin a design or does that come later?

Often as I’m reading a play.  Pretty early in the process I have an idea of what and where.

What do you see as the hottest trend/product in theatrical lighting?

My favorite trend, and one that I’m hopeful will continue and grow, is moving lights with additive color mixing.  Not sure that’s the hottest.  Bright, feature filled LED moving lights are all the rage as well.  That’s what the manufacturers often pitch me anyway.  And wireless control seems to always be a hot topic.

You won the 2012 Tony Award for Peter and the Starcatcher. Do you look on that as the pinnacle of your professional career?

That was a high point in a series of peaks and valleys.

Do you have a dream project in your mind that hasn't come around yet? What would that look like?

I’ve had an eclectic career and it’s still enjoyable.  I am still inspired.  I guess that’s the answer; I want to work on projects that inspire, whatever they are.  My preference has been to be involved with new works of any kind.

Your wife has had a successful career in theatre as well. Is there any competition there?

Not at all.  I want nothing short of the highest success imaginable for her.  She’s heading into an exciting time, whenever we are allowed to work again, and I am thrilled to be around to see it happen.

What do you like to do when you’re not doing lighting?

Speaking of my wife, I mentioned this question to her.  Her answer: “considering how quickly you make decisions in the theatre, it’s amazing how much deliberation you put into things away from it.”  Truth.  And… I’m a big sports fan, I still play the guitar, I’m becoming a better cook, and trying to figure out how to garden.

What’s something about Jeff Croiter that people might find surprising?

There are probably lots of things.  See above (that I’m trying to figure out how to garden). 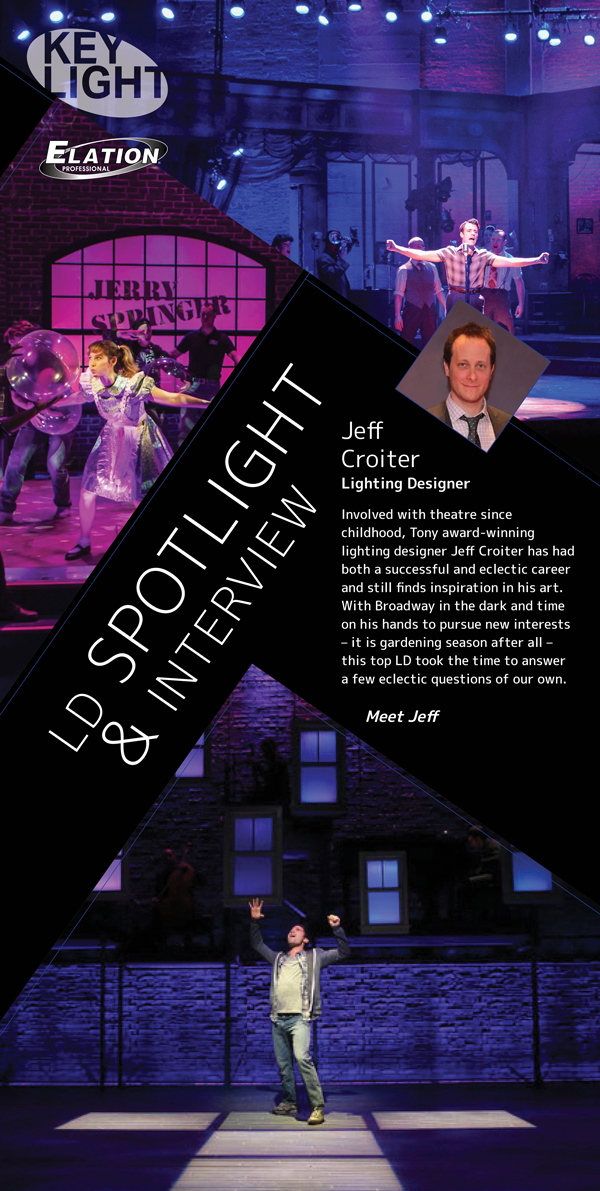