The nearly 40-meter high water tower in Alsdorf, Germany, is a well-known local landmark that serves as an unmistakable beacon to anyone in the area. Visible for kilometers in every direction, its prominence has great benefits for the retail establishments nearby, none more so than the Cineplex Cinetower Kinopark that sits at the base of the historic structure. Cineplex Cinetower offers more than 1,600 seats across nine theatres as well as the Zwei Brüder restaurant, a new kind of cinema and leisure experience all at the same location.

The water tower recently received a dynamic nighttime illumination courtesy of Elation Professional luminaires specified and installed by APA Showtechnik of Belgium. "A tower is a unique architectural structure that is something special and presents a unique opportunity for illumination," comments Daniel Huppermans of APA Showtechnik. He says the reason behind the installation is simple: "To show that there is a cinema there and to attract people to the area."

The multiplex cinema is operated by the Stürtz brothers, a family with a passion for movies who have managed movie theatres in Germany for decades. The Stürtz family also operate a popular cinema in Aachen where APA Showtechnik had earlier illuminated the foyer to the brothers' great satisfaction. "That turned out well so they asked us if there was something special they could do with the tower in Alsdorf," Huppermans said. "We proposed a dynamic lighting concept and they liked the idea. The Stürtz brothers are quite knowledgeable about lighting and the current technology available so they understood well our proposal and the idea behind the illumination."

Huppermans then contacted Bert Schmeits, Elation's Key Account Manager Benelux, about the project and to begin discussion about what luminaires might be suitable. "I have done other projects with American DJ and as sister companies they share the same facility and showroom in Kerkrade so I was familiar with Elation lighting," Huppermans states. "I had always said that one day I would like to use Elation projectors on a project and the Cinetower in Alsdorf was the perfect opportunity to do that. Bert was so professional and it was great to work with him. Even though this was a smaller project for him, Bert made me feel important with the same level of service as if it was a large project."

In order to assess the lighting in practice and better convince the Stürtz brothers of their proposal, Schmeits supported Huppermans with an on location demo. "We took the Proteus Hybrid™ and the Proteus Smarty Hybrid™ to the shootout, both IP65 fixtures and both sufficiently bright," Huppermans said. "My philosophy is not to say to the customer that you should choose the brightest fixture but to choose the fixture that is best for the application. In this case, the Proteus Smarty with its 11,000 lumens of power was sufficient and a better fit for the budget. It also has an efficient 6,000-hour lamp that minimizes bulb changes."

APA Showtechnik subsequently created a design, specified the lights and completed the installation. Chosen to light the tower's tall brick column and bulbous steel top were Proteus Smarty Hybrid™, Paladin Panel™, and WW Profile HP IP™ fixtures, all IP65-rated luminaires, which is important as the lights will be exposed 365 days a year. The fixtures are positioned in three separate groups on the roof of the cinema / restaurant - one of each fixture per group. The Paladin Panel with its 50 x 15W RGBW cells and 20,000-lumen output is used as a high-output washlight to lay down ground color, while the Proteus Smarty Hybrids overlay graphics onto the column and project logos onto the top.

"The Paladin is just awesome!" Huppermans exclaims. "Previously there were older 300W and 500W fixtures in discharge warm white illuminating the water tower. When we did the shootout at night, we could not turn those old fixtures off so we shot on top of that white light with the Paladins in red and it was still so powerful. The Stürtz brothers were amazed." The WW Profiles, high-power ellipsoidal spot fixtures that support B-size metal or HT transparency gobos, are fitted with a gobo of the Cineplex logo that is projected onto the wall at the base of the structure.

The water tower stands as an aesthetic wonder as it has for over 100 years, yet now with a modern illumination scheme that not only draws attention to the area, conveying information and serving as a navigational aid, but as a beacon that creates a unique ambience that puts visitors in a pleasant mood even before the film starts. Importantly, as well, it strengthens the awareness and image of the brand throughout the region. 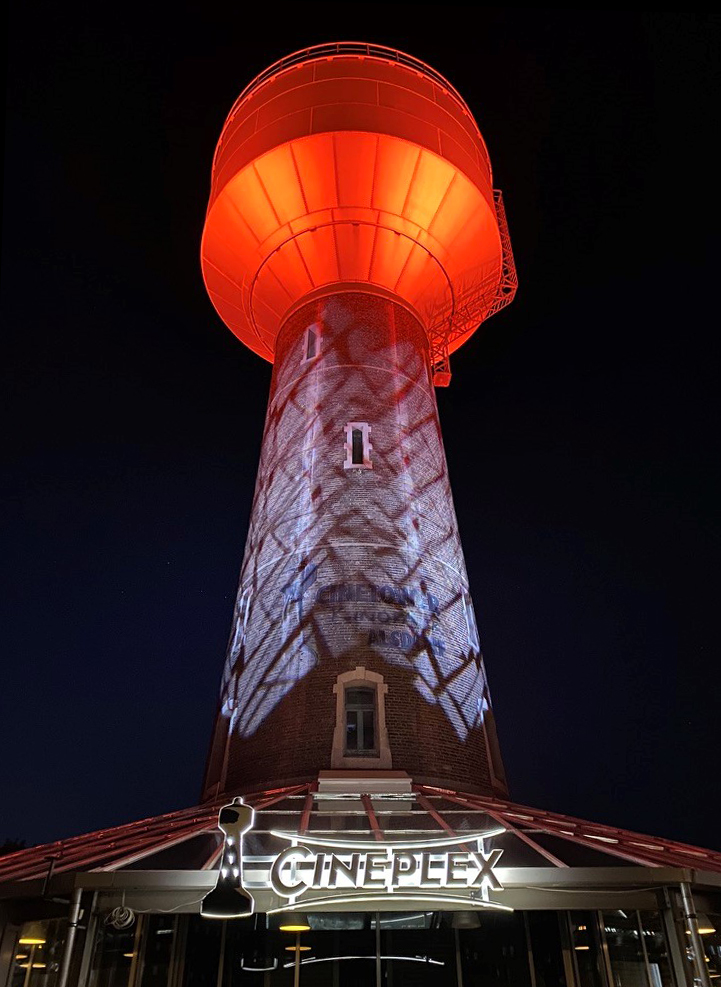 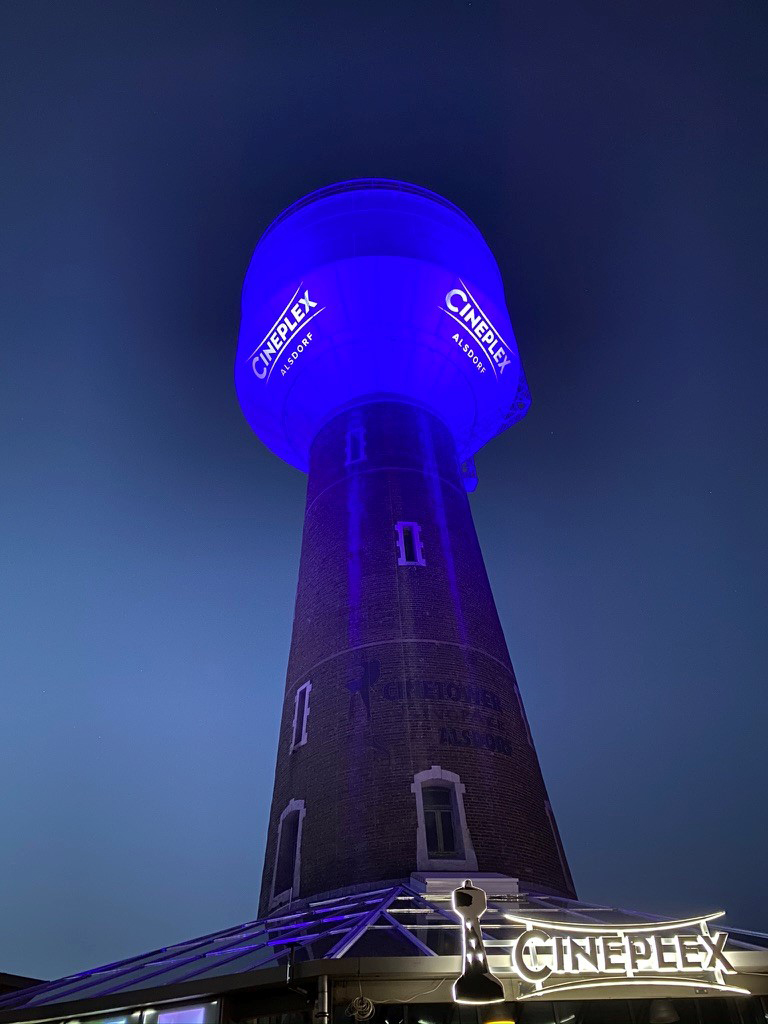 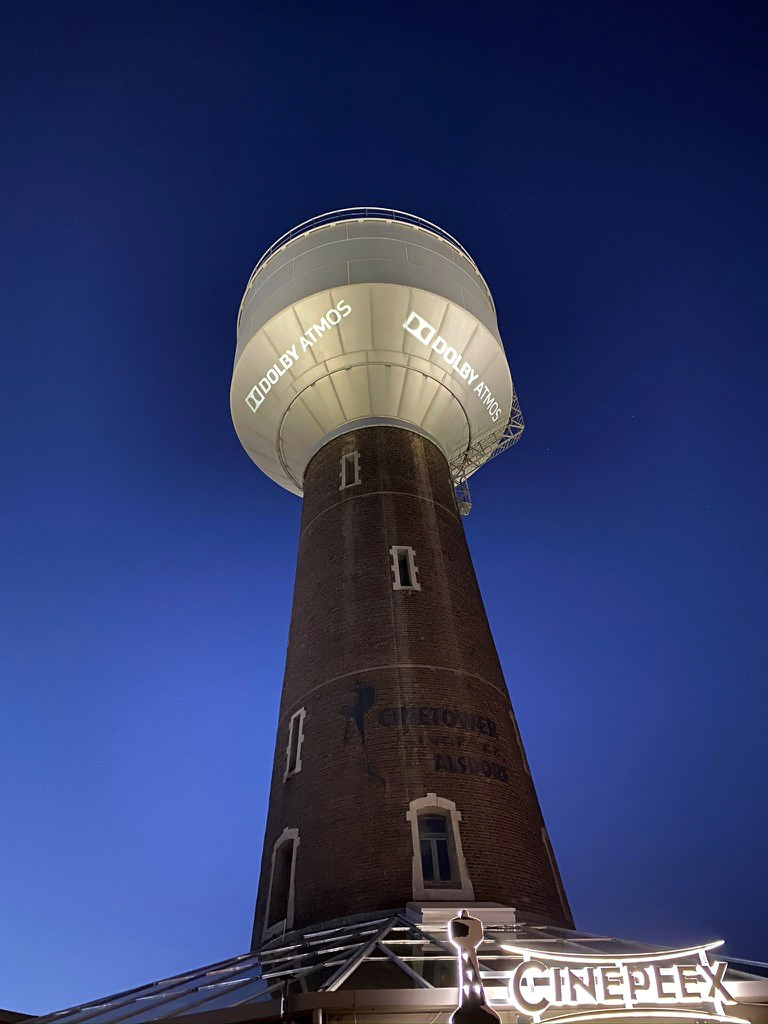